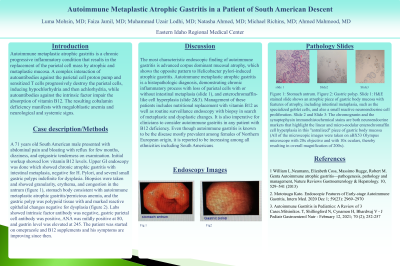 Introduction: Autoimmune metaplastic atrophic gastritis is a chronic progressive inflammatory condition that results in the replacement of the parietal cell mass by atrophic and metaplastic mucosa. A complex interaction of autoantibodies against the parietal cell proton pump and sensitized T cells progressively destroy the parietal cells, inducing hypochlorhydria and then achlorhydria, while autoantibodies against the intrinsic factor impair the absorption of vitamin B12. The resulting cobalamin deficiency manifests with megaloblastic anemia and neurological and systemic signs.

Case Description/Methods: A 71 years old South American male presented with abdominal pain and bloating with reflux for few months, dizziness, and epigastric tenderness on examination. Initial workup showed low vitamin B12 levels. Upper GI endoscopy was done which showed chronic atrophic gastritis with intestinal metaplasia, negative for H. Pylori, and several small gastric polyps indefinite for dysplasia. Biopsies were taken and showed granularity, erythema, and congestion in the antrum (figure 1) and stomach body consistent with autoimmune metaplastic atrophic gastritis/pernicious anemia, and the gastric polyp was polypoid tissue with and marked reactive epithelial changes negative for dysplasia (figure 2). Labs showed intrinsic factor antibody was negative, gastric parietal cell antibody was positive, ANA was mildly positive at 80, and gastrin level was elevated at 245. The patient was started on omeprazole and B12 supplements and his symptoms are improving since then.

Discussion: The most characteristic endoscopic finding of autoimmune gastritis is advanced corpus dominant mucosal atrophy, which shows the opposite pattern to Helicobacter pylori-induced atrophic gastritis. Autoimmune metaplastic atrophic gastritis is a histopathologic diagnosis, demonstrating chronic inflammatory process with loss of parietal cells with or without intestinal metaplasia (slide 1), and enterochromaffin-like cell hyperplasia (slide 2&3).
Management of these patients includes nutritional replacement with vitamin B12 as well as routine surveillance endoscopy with biopsy in search of metaplastic and dysplastic changes. It is also imperative for clinicians to consider autoimmune gastritis in any patient with B12 deficiency. Even though autoimmune gastritis is known to be the disease mostly prevalent among females of Northern European origin, it is reported to be increasing among all ethnicities including South Americans.

Figure: Figure 1: Stomach antrum.
Figure 2: Gastric polyp.
Slide 1: H&E stained slide shows an atrophic piece of gastric body mucosa with features of atrophy, including intestinal metaplasia, such as the specialized goblet cells, and also a small reactive neuroendocrine cell proliferation.
Slide 2 and Slide 3:The chromogranin and the synaptophysin immunohistochemical stains are both neuroendocrine markers that highlight the linear and micro-nodular enterochromaffin cell hyperplasia in this "antralized" piece of gastric body mucosa
(All of the microscopic images were taken on a BX53 Olympus microscope with 20x objective and with 10x oculars, thereby resulting in overall magnification of 200x).