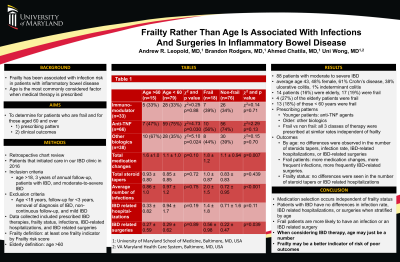 Introduction: Frailty has been associated with infection risk in patients with inflammatory bowel disease (IBD), yet age is the most commonly considered factor when medical therapy is prescribed. We aim to determine the prescribing pattern and clinical outcomes for patients who are frail and for those aged 60 and over.

Methods: A retrospective chart review was conducted on patients who initiated medical therapy in our IBD clinic in 2016 with at least three years of follow up. Data on demographics, IBD therapies prescribed, frailty status, infections, IBD-related hospitalizations, and IBD-related surgeries were collected. Frailty was defined as having at least one of the previously established frailty indicators. Patients aged ≥60 years are categorized as elderly.

Results: 88 patients with moderate to severe IBD initiated treatment at our center in 2016. Patients had an average age of 43 years and 48% were female. Majority of patients had Crohn’s disease (61%). 14 patients (16%) were elderly and 17 (19%) were frail when IBD therapy was initiated. 4 (27%) of the elderly patients were frail, and 13 (18%) of those < 60 years of age were frail. Younger patients were prescribed anti-TNF agents more often, whereas older patients were more likely to be prescribed other biologics. No differences were observed in the number of steroids tapers, infection rate, IBD-related hospitalizations, or IBD-related surgeries for elderly and non-elderly patients. Immunomodulator, anti-TNF agents, and other biologics were prescribed at similar rates in both frail and non-frail patients. Frail patients were noted to have more frequent changes to their medications, higher rate of infections, and more frequently had IBD-related surgeries. No differences were seen in the number of steroid tapers or IBD related hospitalizations between frail and non-frail patients.


Discussion: Frailty should be taken into consideration when prescribing IBD therapy. In this cohort, 19% of those aged < 60 were frail, and 27% of those who were ≥60 years were frail. Age is frequently considered when IBD therapy is prescribed, with younger patients more often prescribed anti-TNF therapy. On the other hand, medication selection was similar for frail and non-frail patients. Frail patients were more likely to have their medication changed, develop infections, and have IBD-related surgeries. Our study demonstrates that when considering IBD therapy, age may just be a number and frailty may be a better indicator of risk.