P2438 - A Rare Cause of Esophagitis: Zollinger-Ellison Syndrome 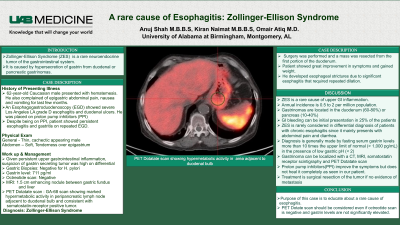 Introduction: Zollinger-Ellison syndrome (ZES) is a rare neuroendocrine tumor of the gastrointestinal system. Patients with ZES produce excessive hormone gastrin and develop tumor usually in the pancreas and the duodenum. It may present as heartburn, epigastric pain and diarrhea with nausea and vomiting.

Case Description/Methods: 62-year-old man was referred for evaluation of inability to keep anything down and significant weight loss. Patient had a complicated past gastrointestinal (GI) history. He initially presented with upper GI bleed and found to have severe Los Angeles (LA) grade D esophagitis and duodenal ulcers. He was placed on proton pump inhibitors (PPI). Repeated Esophagogastroduodenoscopy (EGD) showed healing duodenal ulcers but persistent severe esophagitis and gastritis. Patient continued to have severe inflammation of upper GI tract despite twice daily PPI. Another EGD was planned which showed severe esophagitis, hypertrophic gastric folds and severe duodenal inflammation characterized by ulcers, erythema and edema. Gastric biopsies were negative for H. pylori. Due to continued upper GI inflammation, gastrin levels were checked while off PPI. This came back elevated at 711 pg/mL. MRI showed a 1.5 cm enhancing nodule between gastric fundus and liver. Octreotide scan was negative and repeat EGD couldn’t be performed due to narrowing of esophagus due to severe esophagitis. A Ga-68 PET DOTATE scan showed marked hypermetabolic activity in peripancreatic lymph node adjacent to the duodenal bulb and was consistent with somatostatin-receptor positive tumor confirming ZES. Surgery was performed and mass was resected over the first portion of the duodenum. On follow up after a few weeks’ patient showed great improvement in symptoms.

Discussion: ZES is rare cause of upper GI inflammation. Annual incidence is 0.5 to 2 per million population. It is rarely considered in the differential diagnosis of patients with chronic esophagitis since it mainly presents with abdominal pain and diarrhea. Symptoms usually driven by uncontrolled gastric acid secretions. PPI usually improves symptoms but does not heal it completely as in our patient. Treatment is surgical resection of the gastrin secreting tumor. Purpose of this case is to educate about a rare cause of esophagitis. ZES should be on the differential diagnosis of nonhealing upper GI inflammation. PET DOTATE scan should be considered even if octreotide scan is negative and gastrin levels are not significantly elevated.