Introduction: Upper gastrointestinal bleeding refractory to endoscopic intervention often requires the assistance of interventional radiology. Endovascular embolization via coiling of the supplying vessel is required in these circumstances to achieve hemostasis. While the technical success rate of embolization has been reported as high as 95%, one potential complication is migration of the endovascular coil. While uncommon, this complication can cause significant morbidity and mortality, thus the clinician must be cognizant of this potential complication. We present a case of UGI bleeding due to a duodenal ulcer with a coil protruding from the ulcer bed.


Case Description/Methods: A 68-year-old male with a medical history significant for a prior bleeding duodenal ulcer requiring GDA embolization who presented with severe epigastric pain and melena. He also reported associated nausea and near syncope. Physical exam was notable for hemodynamic stability and melenic stool on digital rectal examination. Laboratory testing was remarkable for a hemoglobin of 9.8 mg/dL. The patient was subsequently taken for esophagogastroduodenoscopy which revealed a large ulceration with an endovascular coil protruding into the lumen from his prior GDA embolization site in the duodenal bulb. In the center of the ulcer bed was a visible oozing vessel for which hemostasis was achieved after mucosal injection of epinephrine followed by argon plasma coagulation. Due to extensive mucosal ulceration and a migrated endovascular coil he underwent exploratory laparotomy with truncal vagotomy, gastroduodenal artery ligation, removal of foreign body, and pyloroplasty without complication


Discussion: Endovascular embolization is an increasingly preferred alternative to surgical intervention in patients having refractory upper gastrointestinal bleeding despite endoscopic intervention. While highly effective, it does have its risk of complications which can cause significant morbidity and mortality. Migration of endovascular coils has been reported to occur in nearly 3% of patients undergoing embolization. This case highlights the importance of the clinician to be familiar with potential complications of endovascular coiling when managing patients with gastrointestinal bleeding refractory to endoscopic intervention. 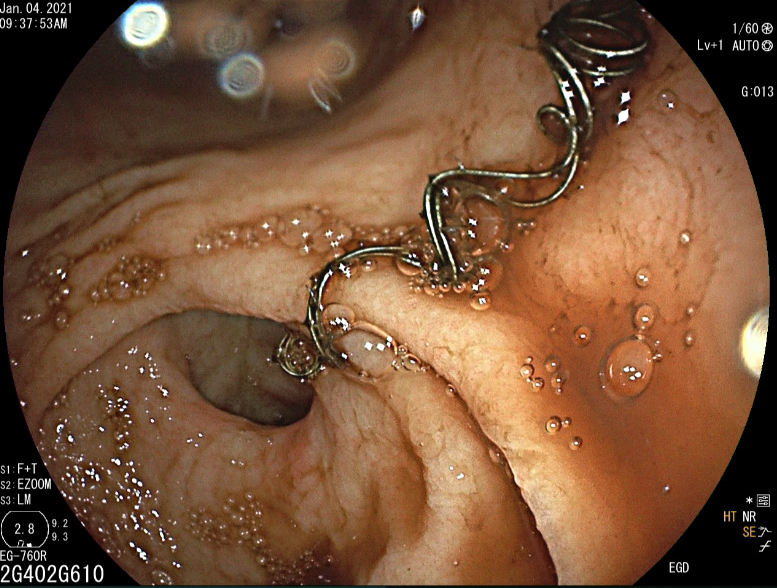 Figure: Endovascular coil protruding into the lumen of the duodenal bulb.