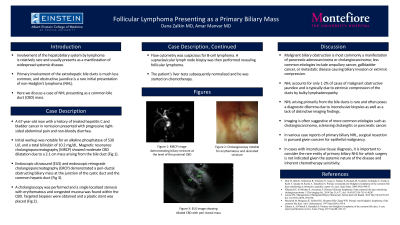 Introduction: Involvement of the hepatobiliary system by lymphoma is relatively rare and usually presents as a manifestation of widespread systemic disease. Primary involvement of the extrahepatic bile ducts is much less common, and obstructive jaundice is a rare initial presentation of non-Hodgkin’s lymphoma (NHL). Here we discuss a case of NHL presenting as a common bile duct (CBD) mass.

Case Description/Methods: A 67-year-old man with a history of treated hepatitis C and bladder cancer in remission presented with progressive right-sided abdominal pain and non-bloody diarrhea. Initial workup was notable for an alkaline phosphatase of 530 U/L and a total bilirubin of 10.2 mg/dL. Magnetic resonance cholangiopancreatography (MRCP) showed moderate CBD dilatation due to a 2.1 cm mass arising from the bile duct. Endoscopic ultrasound (EUS) and endoscopic retrograde cholangiopancreatography (ERCP) demonstrated a peri-ductal obstructing biliary mass at the junction of the cystic duct and the common hepatic duct. A cholangioscopy was performed and a localized stenosis with erythematous and congested mucosa was found within the CBD (Figure 1). Targeted biopsies were obtained and a plastic stent was placed. Flow cytometry was suspicious for B-cell lymphoma. A supraclavicular lymph node biopsy was then performed revealing follicular lymphoma. The patient’s liver tests subsequently normalized and he was started on chemotherapy.

Discussion: Malignant biliary obstruction is most commonly a manifestation of pancreatic adenocarcinoma or cholangiocarcinoma; less common etiologies include ampullary cancers, gallbladder cancer, or metastatic disease causing biliary invasion or extrinsic compression. NHL accounts for only 1-2% of cases of malignant obstructive jaundice and is typically due to extrinsic compression of the ducts by bulky lymphadenopathy. NHL arising primarily from the bile ducts is rare and often poses a diagnostic dilemma due to inconclusive biopsies as well as a lack of distinctive imaging findings.


Imaging in cases such as the one presented here is often suggestive of more common etiologies such as cholangiocarcinoma, sclerosing cholangitis or pancreatic cancer. In various case reports of primary biliary NHL, surgical resection is pursued given the concern for epithelial malignancy. In cases with inconclusive tissue diagnosis, it is important to consider the rare entity of primary biliary NHL for which surgery is not indicated given the systemic nature of the disease and inherent chemotherapy sensitivity.