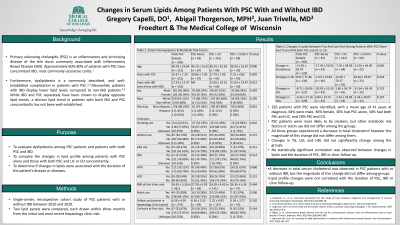 Introduction: Primary sclerosing cholangitis (PSC) is an inflammatory and stricturing disease of the bile ducts commonly associated with Crohn’s Disease (CD) and Ulcerative Colitis (UC). Dyslipidemia has been described in patients with PSC and in those with inflammatory bowel disease (IBD).1,2,3 However, there is paucity and conflicting data addressing dyslipidemia in patients with both PSC and IBD. This study aims to compare the changes in lipid profile among patients with PSC alone and those with both PSC and UC or CD concomitantly.

Methods: Single-center, retrospective cohort study including adult PSC patients with or without IBD between April 2010 and April 2020. Other liver disorders were excluded. Data obtained included baseline demographics and clinical and laboratory records. Two lipid panels, each within three months from the initial and most recent hepatology clinic visit, were evaluated. Statistical analysis was conducted using T-Test and Chi-square. Pearson’s correlation was used to determine if changes in serum lipids were associated with the duration of PSC, IBD or clinic follow-up.

Results: 283 patients with PSC were identified, with a mean age of 41 years at diagnosis. 64% of the patients were male, 92% white and 98.2% non-Hispanic. 50% had both PSC and UC, and 20% PSC and CD. The average clinic follow-up was 6.59 (±4.95) years. The average time between PSC and IBD diagnosis and last clinic follow up was 10.37 (±7.20) and 17.53 (±12.47) years respectively. PSC patients were more likely to be smokers (32.53% p=0.01) whereas other metabolic risk factors or statin use did not differ among the groups. All three groups experienced a decrease in total cholesterol but the magnitude of this change did not differ among them (p=0.682). Changes in TG, LDL and HDL did not significantly change among the groups (see Table 1). No statistically significant correlation was observed between changes in lipids and the duration of PSC, IBD or clinic follow-up.

Discussion: A decrease in total serum cholesterol was observed in PSC patients with or without IBD, but the magnitude of this change did not differ among groups. Lipid profile changes were not correlated with the duration of PSC, IBD or clinic follow-up.