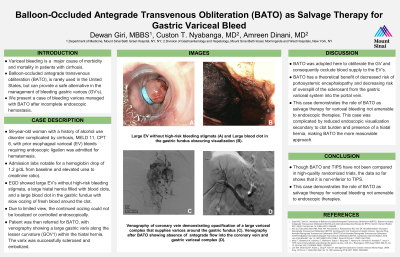 Introduction: Variceal bleeding remains a major cause of morbidity in patients with cirrhosis. Gastric variceal (GV) bleeding, though less common than esophageal variceal (EV) bleed, can pose management difficulties for clinicians. Balloon-occluded antegrade transvenous obliteration (BATO), is rarely used in the United States, but can provide a safe alternative in the management of bleeding GV’s. We present a case of bleeding varices managed with BATO after incomplete endoscopic hemostasis.

Case Description/Methods: 58-year-old woman with history of alcohol use disorder complicated by cirrhosis, MELD 11, CPT 6, with prior EV bleeds requiring endoscopic ligation was admitted for hematemesis. On presentation, she was hemodynamically stable, with labs notable for an Upper GI Bleed (hemoglobin drop of 1.2 g/dL from baseline and elevated urea to creatine ratio). Prior cross-sectional imaging confirmed presence of EV and GV and absence of splenorenal shunt. On Day 2, she had few episodes of melena with subsequent 2.5 g/dL drop in hemoglobin. EGD showed large bleeding EV’s without high-risk stigmata, a large hiatal hernia filled with blood clots, and a large blood clot in the gastric fundus obscuring visualization. Three bands were placed to obliterate the EV, but continued bleeding was noted during procedure. Due to limited view, the continued oozing could not be localized or controlled endoscopically. Patient required massive transfusion protocol to maintain hemodynamics during the procedure. Patient was then consequently taken for BATO, with venography showing a large gastric varix along the lesser curvature (GOV1) within the hiatal hernia. The varix was successfully sclerosed and embolized. Patient did not experience further bleeding and was discharged home.

Discussion: A BATO was adopted here to obliterate the GV and consequently occlude blood supply to the EV. By employing this method, there is a theoretical benefit of decreased risk of portosystemic encephalopathy, hepatic reserve and decreasing risk of overspill of the sclerosant from the gastric variceal system into the portal vein. Though BATO and TIPS have not been compared in high-quality randomized trails, the data so far, shows that it is non-inferior to TIPS. This case demonstrates the role of BATO as salvage therapy for variceal bleeding not amenable to endoscopic therapies. This case was complicated by reduced endoscopic visualization secondary to clot burden and presence of a hiatal hernia, making BATO the more reasonable approach.