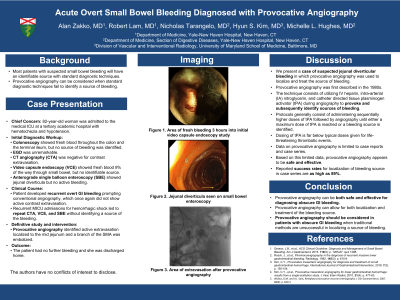 Introduction: Obscure gastrointestinal (GI) bleeding is a rare diagnosis due to the advancement of diagnostic tools. If standard evaluations are unable to identify a source of bleeding, ACG guidelines recommend considering the use of provocative angiography to aid with diagnosis. We present a challenging case in which provocative angiography was utilized to localize and treat episodic large volume jejunal diverticular bleeding.

Case Description/Methods: An 82-year-old female was admitted with hypotension and hematochezia. After volume resuscitation, the patient underwent colonoscopy and EGD. Despite blood seen in the terminal ileum, no source of active bleeding was identified. She then underwent CT angiography (CTA) of the abdomen and pelvis which was unrevealing. Push enteroscopy with endoscopic placement of a video capsule was then performed. Video capsule endoscopy (VCE) revealed fresh blood in the small bowel, but did not identify a source (Figure A). The patient developed hemorrhagic shock and repeat CTA showed no active bleeding. Antegrade single balloon enteroscopy (SBE) revealed multiple non-bleeding jejunal diverticula but no targetable lesion was found (Figure B). The patient again developed overt GI bleeding prompting conventional angiography which did not show active contrast extravasation. After the procedure, the patient developed recurrent hemodynamically unstable bleeding. Repeat SBE, VCE, and CTA did not identify a source. Provocative angiography was then performed and active extravasation was localized to the mid jejunum and a branch of the SMA was embolized (Figure C). The patient had no further bleeding and she was discharged home.

Discussion: Provocative angiography was first described in the 1980s. It utilizes IV heparin, intra-arterial (IA) nitroglycerin, and tissue plasminogen activator (tPA) during angiography to provoke and subsequently identify sources of bleeding. There are various protocols available and all recommend sequentially increasing doses of catheter directed tPA to a maximum dose that is far below typical doses of tPA used for life-threatening thrombotic events. From limited data available, provocative angiography appears to be safe, with few adverse events described. It also is effective at localizing the source of GI bleeding, with success rates in up to 89% of patients. Though not commonly used, provocative angiography should be considered in patients with obscure GI bleeding when traditional methods are unsuccessful in localizing a source of bleeding.