P0228 - A Rare Case of Intestinal Spirochetosis in an Immunocompetent Patient 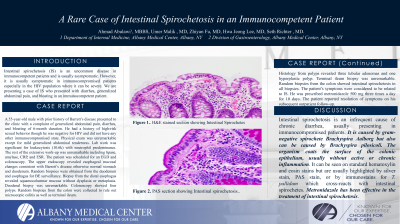 Case Description/Methods: A 55-year-old male with prior history of Barrett’s disease presented to the clinic with a complaint of generalized abdominal pain, diarrhea, and bloating of 6-month duration. He had a history of high-risk sexual behavior though he was negative for HIV and did not have any other immunocompromised state. Physical exam was unremarkable except for mild generalized abdominal tenderness. Lab work was significant for leukocytosis (10.6k) with neutrophil predominance. The rest of the extensive work-up was unremarkable including lipase, amylase, CRP, and ESR. The patient was scheduled for an EGD and colonoscopy. The upper endoscopy revealed esophageal mucosal changes consistent with Barrett’s disease otherwise normal stomach and duodenum. Random biopsies were obtained from the duodenum and esophagus for BE surveillance. Biopsy from the distal esophagus revealed squamocolumnar mucosa without dysplasia or metaplasia. Duodenal biopsy was unremarkable. Colonoscopy showed four polyps. Random biopsies from the colon were collected to rule out microscopic colitis as well as terminal ileum. Histology from polyps revealed three tubular adenomas and one hyperplastic polyp. Terminal ileum biopsy was unremarkable. Random biopsies from the colon showed intestinal spirochetosis in all biopsies. The patient’s symptoms were considered to be related to IS. He was prescribed metronidazole 500 mg three times a day for 10 days. The patient reported resolution of symptoms on his subsequent outpatient follow-up.

Discussion: Intestinal spirochetosis is an infrequent cause of chronic diarrhea, usually presenting in immunocompromised patients. It is caused by gram-negative spirochete Brachyspira Aalborg but also can be caused by Brachyspira pilosicoli. The organism coats the surface of the colonic epithelium, usually without active or chronic inflammation. It can be seen on standard hematoxylin and eosin stains but are usually highlighted by silver stain, PAS stain, or by immunostains for T. pallidum which cross-reacts with intestinal spirochetes. Metronidazole has been effective in the treatment of intestinal spirochetosis.