P2000 - Caught up in You: A Rare Complication of Roux-en-Y Gastric Bypass Surgery 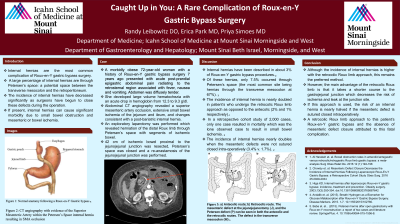 Introduction: Internal hernias are the most common complication of Roux-en-Y gastric bypass surgery. A large percentage are through Petersen’s space: a potential space between the transverse mesocolon and retroperitoneum. If present, internal hernias can cause significant morbidity due to small bowel obstruction and mesenteric or bowel ischemia.

Case Description/Methods: A morbidly obese 72 year old woman with a history of Roux-en-Y gastric bypass surgery 7 years ago, atrial fibrillation, COPD, cirrhosis, and treated hepatitis C, presented with acute post-prandial epigastric abdominal pain radiating retrosternally with nausea and vomiting. Patient was hemodynamically stable but uncomfortable. Her abdomen was diffusely tender with guarding. Upon admission, she was febrile (38.4°C). She also developed large volume hematochezia with an acute drop in hemoglobin from 12.3 to 9.3g/dl.

Post-operative course was complicated by prolonged intubation and ventilator associated pneumonia. She expired after 30 days in the intensive care unit.

Discussion: This is one of the first recorded cases of SMA occlusion due to an internal hernia following a Roux-en-Y gastric bypass procedure. The retrocolic Roux limb approach taken during her bypass and the absence of mesenteric defect closure attributed to this complication.

Meta-analysis shows the incidence of internal hernia nearly doubles in patients who undergo the retrocolic Roux limb approach in contrast to antecolic. In a retrospective study, the incidence of internal hernias nearly doubled when the mesenteric defects were not sutured closed intra-operatively. Our case emphasizes the need to consider small bowel ischemia in patients with a history of Roux-en-Y gastric bypass presenting with abdominal pain and hematochezia.