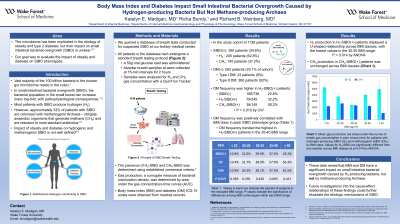 Introduction: The human gut microbiome is a complex ecosystem of around 100 trillion bacteria that resides in the lumen of the intestinal tract. In the healthy gut, the vast majority of these bacteria inhabit the colon. However, in small intestinal bacterial overgrowth (SIBO), the bacterial population of the small bowel lumen can increase many log-fold. The majority of patients with SIBO produce hydrogen (H2); however, around 33% are colonized with methanogenic Archaea – anaerobic organisms that produce methane (CH4) and are often resistant to standard antibiotics. Although the microbiome has been implicated in the etiologies of obesity and type 2 diabetes (DM), the impact of obesity and DM on SIBO is not well defined.

Methods: We queried a database of breath tests conducted for suspected SIBO at our tertiary medical center. All patients had undergone a standard testing protocol that involved administering a 50g oral glucose load; obtaining breath samples at 15-min intervals for 2 hours; and analyzing them for H2 and CH4 gas concentration. Gas production, a surrogate measure of bacterial colonization density, was determined by area under the time-concentration curves (AUC). The presence of SIBO was determined using established consensus criteria. Body mass index (BMI) and DM ICD-10 codes were obtained from medical records.

Discussion: These data reveal that BMI and DM have a significant impact on small intestine bacterial colonization caused by H2-producing bacteria, but not by methane-producing Archaea. Future investigations into the cause-effect relationships of these findings could further elucidate the etiologic mechanisms of SIBO. 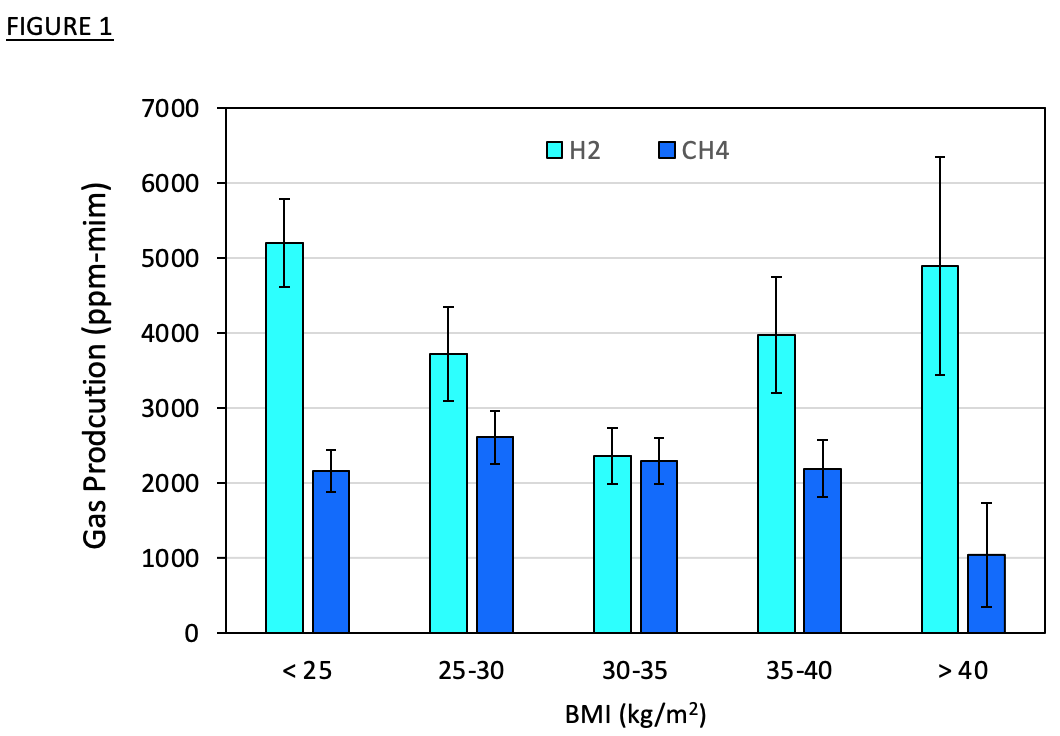 Figure: Mean gas production (as areas-under-the-curves of breath gas concentration in ppm versus time) for patients with hydrogen-producing SIBO (H2) and methanogenic SIBO (CH4) by BMI class. Values for H2-SIBO are significantly different from one another across BMI classes at p=0.014 by ANOVA.
Table:
Values in each row indicate the percent of subjects in the indicated BMI range. P-values indicate the significance of differences among SIBO phenotypes within each BMI range.