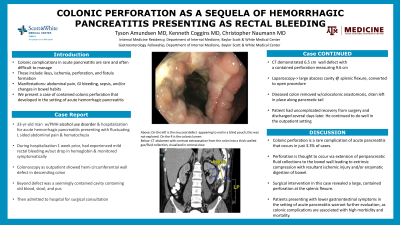 Introduction: Colonic complications are rare in acute pancreatitis and often are difficult to manage. These include ileus, ischemia, perforation, and fistula formation, which may be detected on imaging or colonoscopy. Such complications may manifest as abdominal pain, GI bleeding, sepsis, and/or changes in bowel habits. The following is a case of contained colonic perforation that developed in the setting of acute hemorrhagic pancreatitis.

Case Description/Methods: A 30-year-old man with a history of alcohol abuse and recent hospitalization for acute hemorrhagic pancreatitis presented as an outpatient with fluctuating left sided abdominal pain and hematochezia. During hospitalization the week prior, he had experienced mild rectal bleeding without drop in hemoglobin that was monitored symptomatically. At his outpatient visit it was agreed to perform colonoscopy. Colonoscopy showed a hemi circumferential wall defect in the descending colon. Beyond the defect was a seemingly contained cavity containing old blood, stool, and pus. (Figure 1)

The patient was admitted to the hospital with surgical consultation. CT demonstrated a wall defect in the left colon measuring 6.5 cm with an associated contained perforation measuring up to 9.6 cm. The patient underwent laparoscopy, revealing a large abscess cavity at the splenic flexure. The procedure was converted to open given the dense inflammatory nature of the disease process. Ultimately, the diseased colon was removed and a colocolonic anastomosis was created. A drain was placed in the left upper quadrant along the tail of the pancreas. The patient had an uncomplicated recovery from surgery. He was discharged several days later and continued to do well in the outpatient setting.

Discussion: This is an unusual case of a colonic complication following acute hemorrhagic pancreatitis. Colonic perforation is a rare complication of acute pancreatitis that occurs in just 3.3% of cases. Perforation is thought to occur via extension of peripancreatic fluid collections to the bowel wall leading to extrinsic compression with resultant ischemic injury and/or enzymatic digestion of bowel. Surgical intervention in this case revealed a large, contained perforation at the splenic flexure. Although colonic complications are uncommon, patients presenting with lower gastrointestinal symptoms in the setting of acute pancreatitis warrant further evaluation, as colonic complications are associated with high morbidity and mortality.

Figure: R Image: On the right is the colon lumen visible; on the left is the mucosal defect which appears to end in a blind pouch, though this was not explored.
L image: Surrounding mucosal abnormalities with nodular appearance