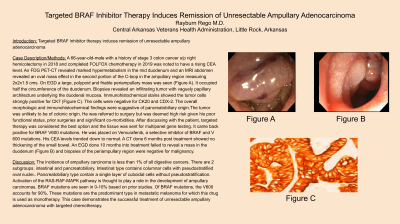 Case Description/Methods: A 66-year-old-male with a history of stage 3 colon cancer s/p right hemicolectomy in 2018 and completed FOLFOX chemotherapy in 2019 was noted to have a rising CEA level. An FDG PET-CT revealed marked hypermetabolism in the mid duodenum and an MRI abdomen revealed an oval mass effect in the second portion of the C-loop in the ampullary region measuring 2x2x1.5 cms. On EGD a large, polypoid and friable periampullary mass was seen (Figure A). It occupied half the circumference of the duodenum. Biopsies revealed an infiltrating tumor with vaguely papillary architecture underlying the duodenal mucosa. Immunohistochemical stains showed the tumor cells strongly positive for CK7 (Figure C). The cells were negative for CK20 and CDX-2. The overall morphologic and immunohistochemical findings were suggestive of pancreatobiliary origin.The tumor was unlikely to be of colonic origin. He was referred to surgery but was deemed high risk given his poor functional status, prior surgeries and significant co-morbidities. After discussing with the patient, targeted therapy was considered the best option and the tissue was sent for multipanel gene testing. It came back positive for BRAF V600 mutations. He was placed on Vemurafenib, a selective inhibitor of BRAF and V 600 mutations. His CEA levels trended down to normal. A CT done 6 months post treatment showed no thickening of the small bowel. An EGD done 10 months into treatment failed to reveal a mass in the duodenum (Figure B) and biopsies of the periampullary region were negative for malignancy.

Discussion: The incidence of ampullary carcinoma is less than 1% of all digestive cancers. There are 2 subgroups, intestinal and pancreatobiliary. Intestinal type contains columnar cells with pseudostratified oval nuclei.. Pancreatobiliary type contain a single layer of cuboidal cells without pseudostratification. Activation of the RAS-RAF-MAPK pathway is thought to play a role in the development of ampullary carcinomas. BRAF mutations are seen in 0-10% based on prior studies. Of BRAF mutations, the V600 accounts for 90%. These mutations are the predominant type in metastatic melanoma for which this drug is used as monotherapy. This case demonstrates the successful treatment of unresectable ampullary adenocarcinoma with targeted chemotherapy 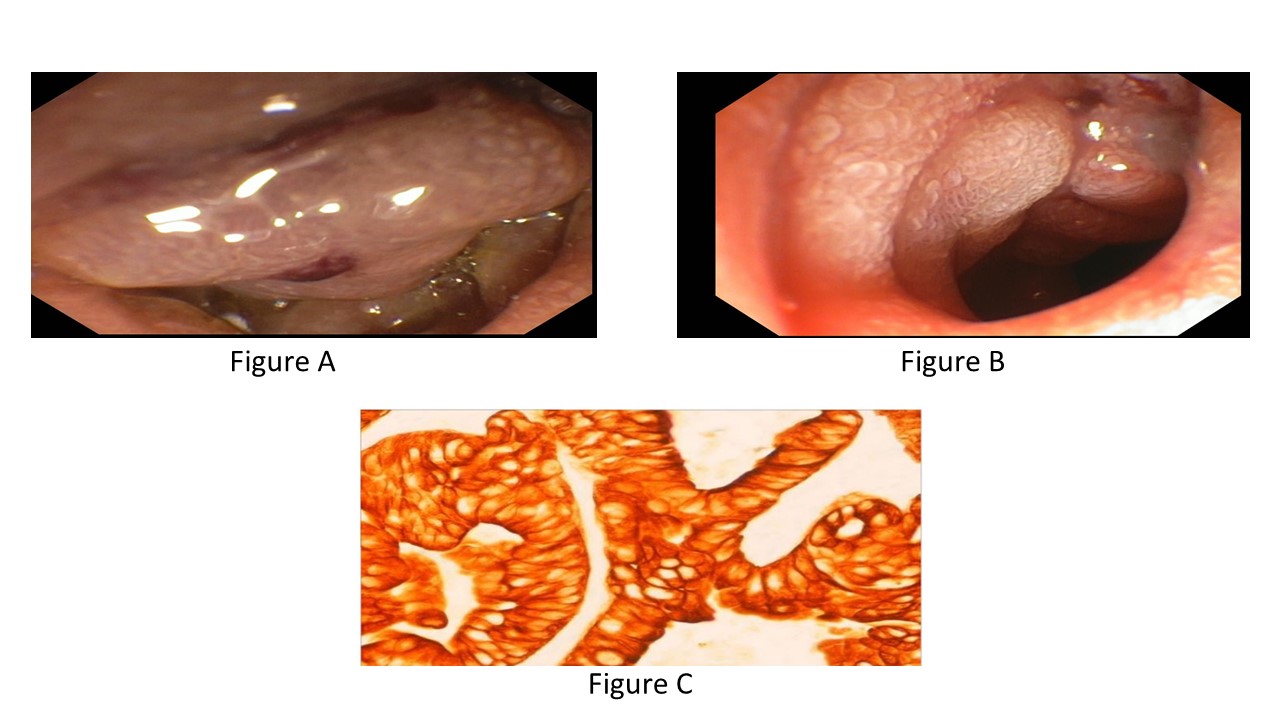