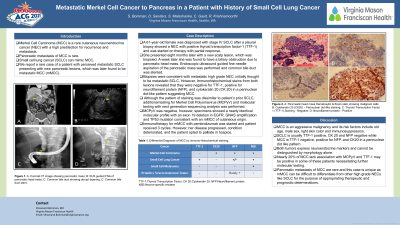 Introduction: Merkel Cell Carcinoma (MCC) is a rare cutaneous neuroendocrine cancer (NEC) with a high predilection for recurrence and metastasis. Small cell lung cancer (SCLC) can mimic MCC and we report a rare case of a patient with perceived metastatic SCLC presenting with new pancreatic lesions, which was later found to be metastatic MCC (mMCC).

Case Description/Methods: A 61-year-old female was diagnosed with stage IV SCLC after a pleural biopsy showed a NEC with positive thyroid transcription factor-1 (TTF-1) and was started on therapy with partial response. She presented eight months later with a new scalp lesion, which was biopsied. A week later she was found to have a biliary obstruction due to pancreatic head mass. Endoscopic ultrasound guided fine needle aspiration of the pancreatic mass was performed and common bile duct was stented (Figure 1 A-C). Biopsies were consistent with metastatic high grade NEC, initially thought to be metastatic SCLC. However, Immunohistochemical stains from both lesions revealed that they were negative for TTF-1, positive for neurofilament protein (NFP), and cytokeratin 20 (CK 20) in a perinuclear dot-like pattern suggesting MCC (Figure 1 D-E). Although the pattern of staining was dissimilar to patient’s prior SCLC, additional testing for Merkel Cell Polyomavirus (MCPyV) and molecular testing with next generation sequencing analysis was performed. MCPyV was negative, however, specimens showed a nearly identical molecular profile with an exon 19 deletion in EGFR, GNAS amplification and TP53 mutation consistent with an mMCC of cutaneous origin.

Immunotherapy for mMCC with pembrolizumab was started and patient received 3 cycles. However, her disease progressed, condition deteriorated, and the patient opted to palliate in hospice.

Discussion: MCC is an aggressive malignancy and its risk factors include old age, male sex, light skin color and immunosuppression. SCLC is usually TTF-1 positive, CK 20 and NFP negative while MCC is TTF-1 negative, positive for NFP, and CK20 in a perinuclear dot like pattern. Both tumors express neuroendocrine markers and cannot be distinguished by morphology alone. Nearly 20% of MCC lack association with MCPyV and TTF-1 may be positive in some of these patients necessitating further molecular testing. Pancreatic metastasis of MCC are rare and this case is unique as mMCC can be difficult to differentiate from other high grade NECs like SCLC for the purpose of appropriating therapeutic and prognostic determinations. 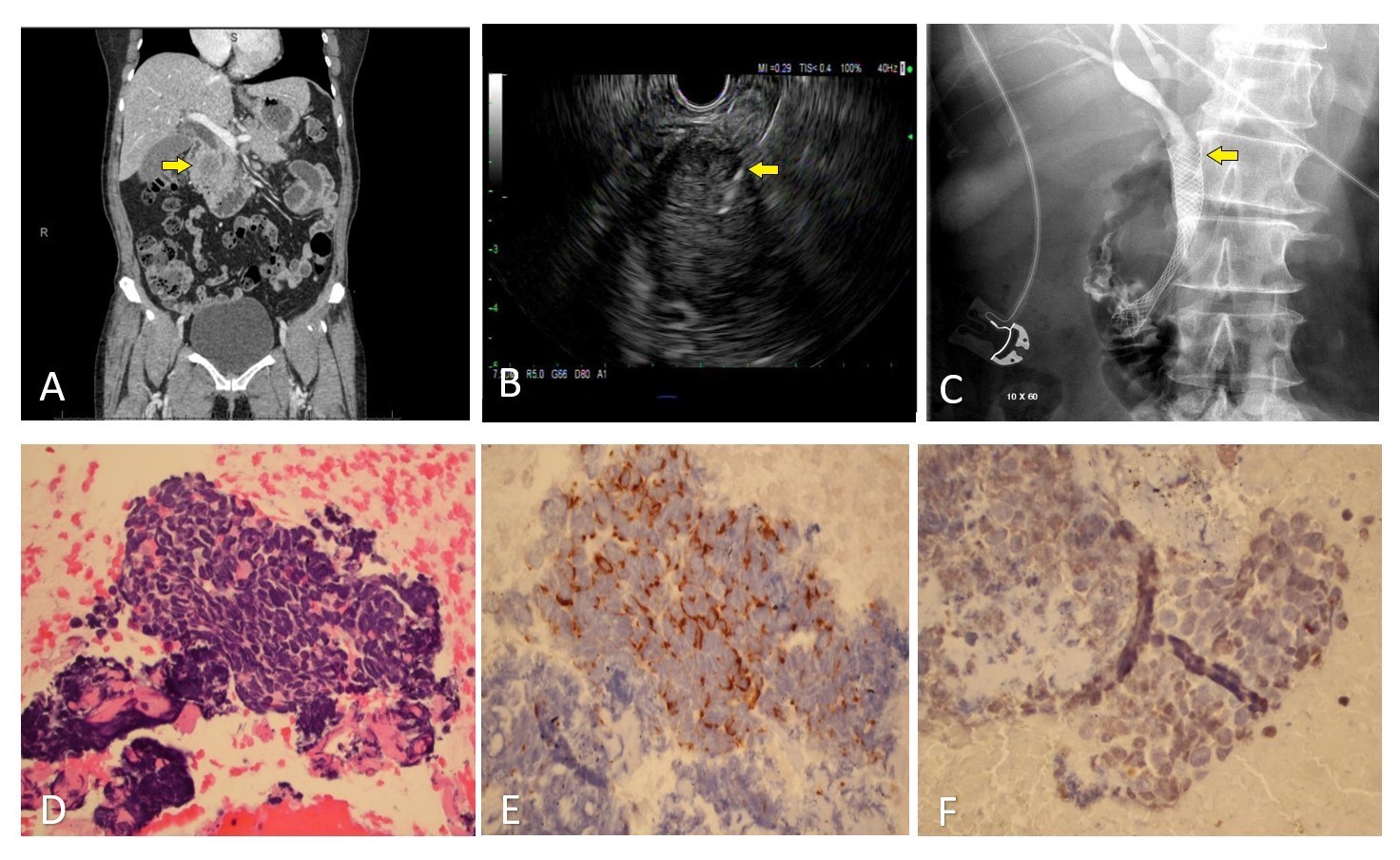