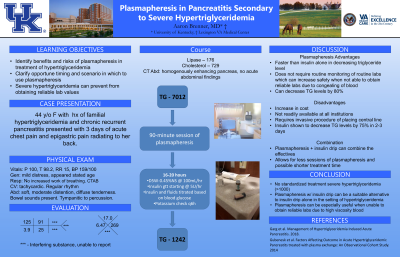 Introduction: Pancreatitis secondary to hyperTG has an incidence around 5% with most cases having severe hyperTG (greater than 1000mg/dL). Evidence is present for both apheresis and insulin infusion individually, but little evidence is available for them in combination.

Case Description/Methods: A forty-four-year-old female with familial hypertriglyceridemia and chronic recurrent pancreatitis presented with three days of acute onset chest and epigastric pain radiating to her back. She takes atorvastatin, fenofibrate and omega-3-acid ethyl esters, with most recent TG level of 775mg/dL. Lab results showed lipase 167 IU/L and TG level of 7012mg/dL. All other labs were unable to be obtained due to “interfering substance.” Visualization showed the blood was congealing before analysis could be performed.

Plasmapheresis was initiated due to hyperTG making labs unreliable and thus preventing safe titration of an insulin drip. After one cycle, 90 minutes, an insulin drip was started and titrated based on a modified DKA protocol designed for hyperTG induced pancreatitis. The drip was started at 3U/hr and increased by one unit per hour based on glucose and TG level. After the 90-minute apheresis session and 24hrs of insulin drip, the TG level decreased to 1242mg/dL. TG level decreased to 496mg/dL on day 4 and the insulin drip was stopped.

Discussion: There is no standardized therapy recommendation for severe hyperTG. According to a literature review by Garg, plasmapheresis alone is faster than insulin alone in reducing the TG level. Garg also finds that apheresis is more costly and not as readily available as insulin. Gubensek, with apheresis, showed an 80% reduction in TG level in 50-person case series. Insulin drips are effective in a reducing TG levels over a longer period can lower TG level 50-75% over 2-3 days in patients with severe hyperTG.