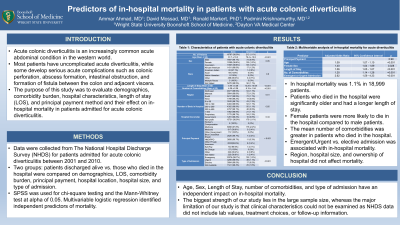 Introduction: Acute colonic diverticulitis is an increasingly common acute abdominal condition in the western world. Most patients have uncomplicated acute diverticulitis, while some develop serious complications such as colonic perforation, abscess formation, intestinal obstruction, and formation of fistula between the colon and adjacent viscera. The purpose of this study was to evaluate demographics, comorbidity burden, hospital characteristics, length of stay (LOS), and principal payment method and their effect on in-hospital mortality in patients admitted for acute colonic diverticulitis.

Methods: Data were collected from The National Hospital Discharge Survey (NHDS) for patients admitted for acute colonic diverticulitis between 2001 and 2010. Two groups: patients discharged alive vs. those who died in the hospital were compared on demographics, LOS, comorbidity burden, principal payment, hospital location, hospital size, and type of admission. SPSS was used for chi-square testing and the Mann-Whitney test at alpha of 0.05. Multivariable logistic regression identified independent predictors of mortality.

Results: Acute colonic diverticulitis was identified in 18,999 patients, 212 (1.1%) of whom suffered in-hospital mortality. Patients who died in the hospital were significantly older and had a longer LOS. Female patients were more likely to die in the hospital compared to male patients. The mean number of comorbidities was greater in patients who died in the hospital. Emergent/Urgent vs. elective admission was associated with in-hospital mortality. Region, hospital size, and ownership of hospital did not differ in mortality (Table 1). Additionally, multivariable logistic regression showed age, female sex, LOS, number of comorbidities, and emergent/urgent admission to be independent predictors of mortality after controlling for the other four predictors.

Discussion: Acute colonic diverticulitis is a common acute abdominal condition that can lead to serious complications including death. We found that age, sex, LOS, number of comorbidities, and type of admission have an independent impact on in-hospital mortality. The strength of our study lies in the large sample size, whereas the major limitation of our study is that clinical characteristics could not be examined as NHDS data did not include lab values, treatment choices, or follow-up information.