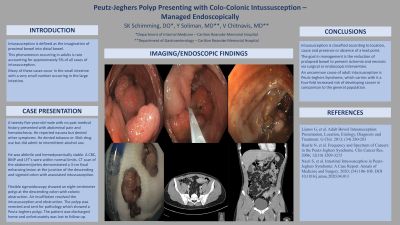 Introduction: Adult intussusception is defined as the invagination of proximal bowel into distal bowel. This phenomenon occurring in adults is rare, generally arising in the small intestines with a small percentage occurring in the colon [1]. We present a rare case of a twenty-five-year-old man with intussusception complicated by colonic obstruction that was found to have an eight-centimeter polyp acting as a lead point.

Case Description/Methods: A twenty-five-year-old male with no past medical history presented with abdominal pain and hematochezia. He reported nausea but denied other symptoms. He denied tobacco or illicit drug use but did admit to intermittent alcohol use. He was afebrile and hemodynamically stable. A CBC, BMP, and LFT's were within normal limits. A CT scan of the abdomen and pelvis demonstrated a 3-cm focal enhancing lesion at the junction of the descending and sigmoid colon with associated intussusception (Figure 2). Flexible sigmoidoscopy showed an eight-centimeter polyp at the descending colon with colonic obstruction (Figure 1). Air insufflation resulted in resolution of the intussusception and obstruction. The polyp was resected and sent for pathology which showed a Peutz-Jeghers polyp (Figure 1). The patient was discharged home and unfortunately was lost to follow up.

Discussion: Intussusception is classified according to location, cause and presence or absence of a lead point. The ultimate goal in management is the reduction of prolapsed bowel to prevent ischemia and necrosis via surgical or endoscopic intervention. An uncommon cause of adult intussusception is Peutz-Jeghers Syndrome (PJS) - an autosomal dominant disorder characterized by hyperpigmented mucocutaneous macules, hamartomatous polyps within the gastrointestinal tract, and an increased risk of developing cancer [3]. The risk for developing cancer in PJS is 85%, representing a four-fold increased risk in comparison to the general population [2]. Therefore, early diagnosis and establishment of routine cancer screening is paramount in the long term management of patients with PJS. 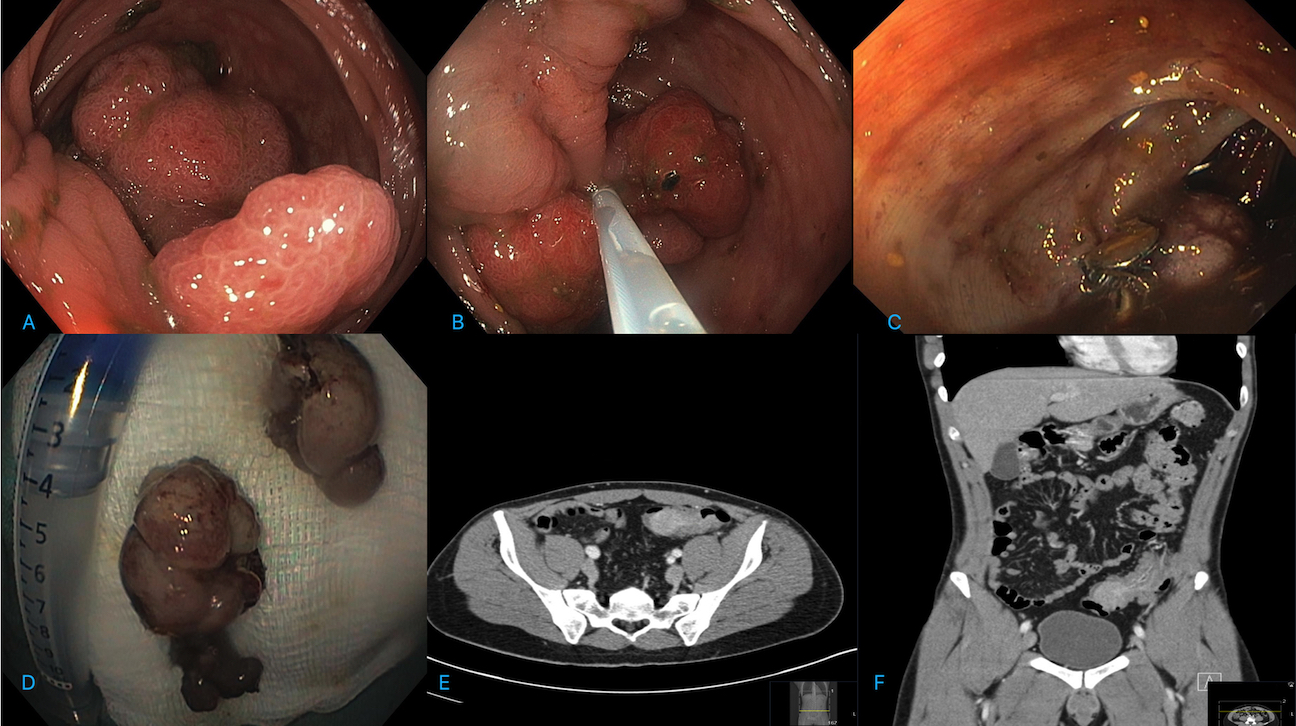