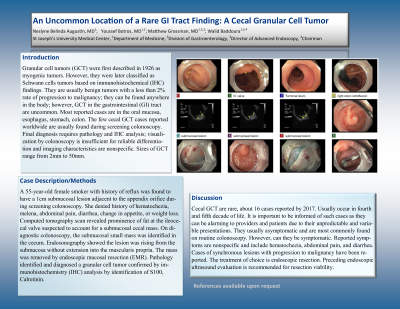 Introduction: Granular cell tumors (GCT) were first described in 1926 as myogenic tumors. However, they were later classified as Schwann cells tumors based on immunohistochemical (IHC) findings (Filie, Lage, & Azumi, 1996). They are usually benign tumors with a less than 2% rate of progression to malignancy; they can be found anywhere in the body (Lowe DL & 17396735.); however, GCT in the gastrointestinal (GI) tract are uncommon. Most reported cases are in the oral mucosa, esophagus, stomach, colon. The few cecal GCT cases reported worldwide are usually found during screening colonoscopy. Final diagnosis requires pathology and IHC analysis; visualization by colonoscopy is insufficient for reliable differentiation and imaging characteristics are nonspecific (Rajagopal, Gochhait, Shanmugan, & Barwad, 2017). Sizes of GCT range from 2mm to 50mm (Roncati, et al., 2013).

Case Description/Methods: A 55-year-old female smoker with history of reflux was found to have a 1cm submucosal lesion adjacent to the appendix orifice during screening colonoscopy. She denied history of hematochezia, melena, abdominal pain, diarrhea, change in appetite, or weight loss. Computed tomography scan revealed prominence of fat at the ileocecal valve suspected to account for a submucosal cecal mass. On diagnostic colonoscopy, the submucosal small mass was identified in the cecum. Endosonography showed the lesion was rising from the submucosa without extension into the muscularis propria. There was no sonographic evidence of invasion into the muscularis propria. The mass was removed by endoscopic mucosal resection (EMR). Pathology identified and diagnosed a granular cell tumor confirmed by immunohistochemistry (IHC) analysis by identification of S100, Calretinin.

Discussion: Cecal GCT are rare, about 16 cases reported by 2017. Usually occur in fourth and fifth decade of life. It is important to be informed of such cases as they can be alarming to providers and patients due to their unpredictable and variable presentations. They usually asymptomatic and are most commonly found on routine colonoscopy. However, can they be symptomatic. Reported symptoms are nonspecific and include hematochezia, abdominal pain, and diarrhea. Cases of synchronous lesions with progression to malignancy have been reported. The treatment of choice is endoscopic resection. Preceding endoscopic ultrasound evaluation is recommended for resection viability (Erginel, et al., 2016). 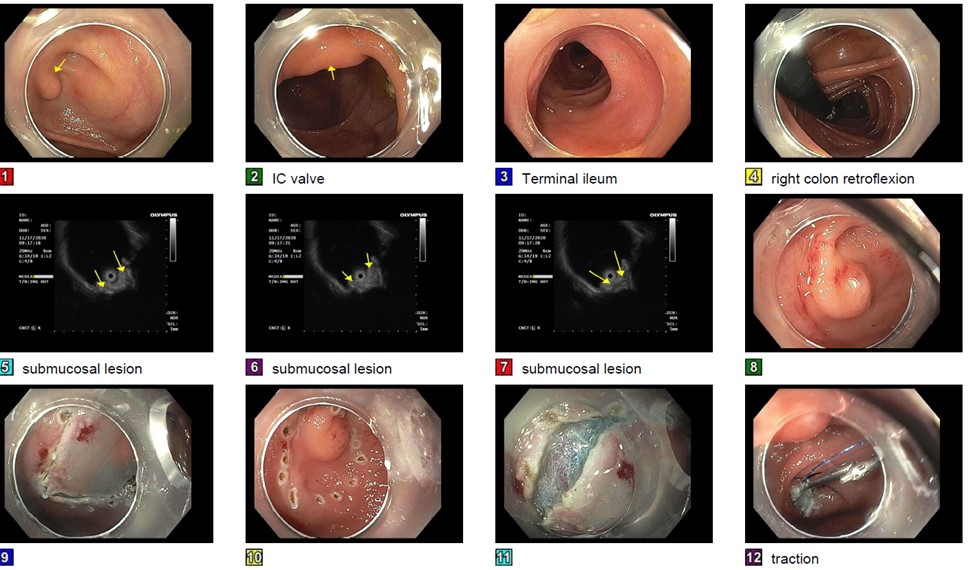