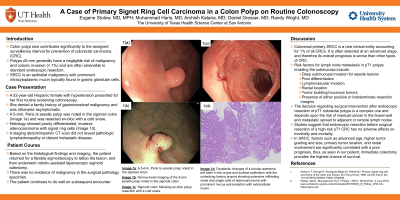 Case Description/Methods: A 52-year-old Hispanic female with hypertension presented for her first routine screening colonoscopy. She denied a family history of gastrointestinal malignancy and was otherwise asymptomatic. A 5-mm, Paris Is sessile polyp was noted in the sigmoid colon (Image 1a) and was resected en-bloc with a cold snare. Histology showed poorly differentiated, invasive adenocarcinoma with signet ring cells (Image 1d). A staging abdominopelvic CT scan did not reveal pathologic lymphadenopathy or distant metastatic disease. Based on the histological findings and imaging, the patient returned for a flexible sigmoidoscopy to tattoo the lesion, and then underwent robotic-assisted laparoscopic sigmoid colectomy. There was no evidence of malignancy in the surgical pathology specimen.

Discussion: SRCC is an epithelial malignancy with prominent intracytoplasmic mucin typically found in gastric glandular cells. Colorectal primary SRCC is a rare clinical entity accounting for 1% of all CRCs. It is often detected at an advanced stage, and therefore its overall prognosis is worse than other types of CRC. Risk factors for lymph node metastasis in pT1 polyps invading the submucosa include deep submucosal invasion for sessile lesions, poor differentiation, lymphovascular invasion, rectal location, tumor budding/mucinous tumors and the presence of either positive or indeterminate resection margins. The decision regarding surgical intervention after endoscopic resection of pT1 colorectal polyps is a complex one and depends upon the risk of residual cancer in the bowel wall and metastatic spread to adjacent or remote lymph nodes. Studies suggest that endoscopic resection before surgical resection of a high-risk pT1 CRC has no adverse effects on morbidity and mortality. In SRCC, factors such as advanced age, higher tumor grading and size, primary tumor location and nodal involvement are significantly correlated with a poor prognosis, thus, as seen in our patient, immediate colectomy provides the highest chance of survival. 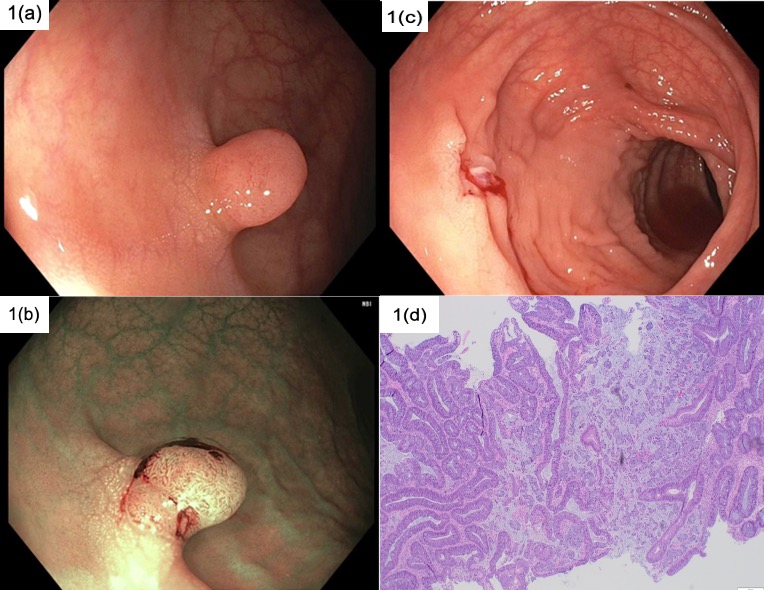 1(a): A 5-mm, Paris Is sessile polyp noted in the sigmoid colon on routine colonoscopy

1(b): Narrow-band imaging of a 5-mm, Paris Is sessile polyp noted in the sigmoid colon on routine colonoscopy

1(d): 40x magnification: Dysplastic changes of a tubular adenoma are seen in the crypts and surface epithelium with the underlying lamina propria showing extensive infiltrating nests and single cells of adenocarcinoma with prominent mucus extravasation with extracellular mucin.