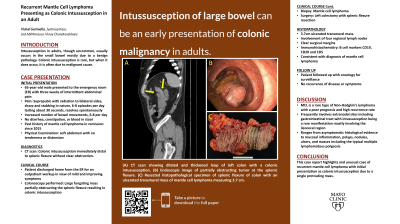 Case Description/Methods: We present the case of a 65-year-old male with history of mantle cell lymphoma (MCL) that had been in remission since 2015, who presented to the emergency room (ER) with three weeks of intermittent abdominal pain. The pain was described as sharp, lasting for 30 seconds, 6-8 times a day and resolving spontaneously. Physical examination revealed a soft abdomen with no tenderness or distension. CT scan demonstrated colonic intussusception immediately distal to the splenic flexure without clear obstruction (Fig 1A). Given relatively mild and improving symptoms, surgical intervention was not pursued, and the patient was discharged home from the ER for an outpatient workup. Outpatient colonoscopy was performed 2 weeks later which revealed a large fungating mass partially obstructing the splenic flexure resulting in colonic intussusception (Fig 1B). Biopsies were suggestive of MCL. The patient underwent left colectomy with splenic flexure resection (Fig 1C). Final pathology of the resected specimen revealed a 3.7cm ulcerated transmural mass with involvement of four regional lymph nodes with clear surgical margins. Immunohistochemistry expressed presence of B cell markers CD19, CD20 and CD5, consistent with a diagnosis of recurrent MCL. The patient was referred to oncology and has been without symptoms for 2 months.

Discussion: MCL is a rare type of Non-Hodgkin’s lymphoma with a poor prognosis and high recurrence rate. It frequently involves extranodal sites including the gastrointestinal tract and may range from asymptomatic histological evidence to mucosal inflammation, polyps, nodules, ulcers, and masses including the typical multiple lymphomatous polyposis. Intussusception is a rare manifestation of MCL. The most common site of involvement in the gastrointestinal tract is the ileocecal region, although other areas may also be involved. Very few cases of colonic intussusception have been reported. This case report highlights an unusual case of recurrent Mantle cell lymphoma with initial presentation as colonic intussusception due to a single protruding mass. 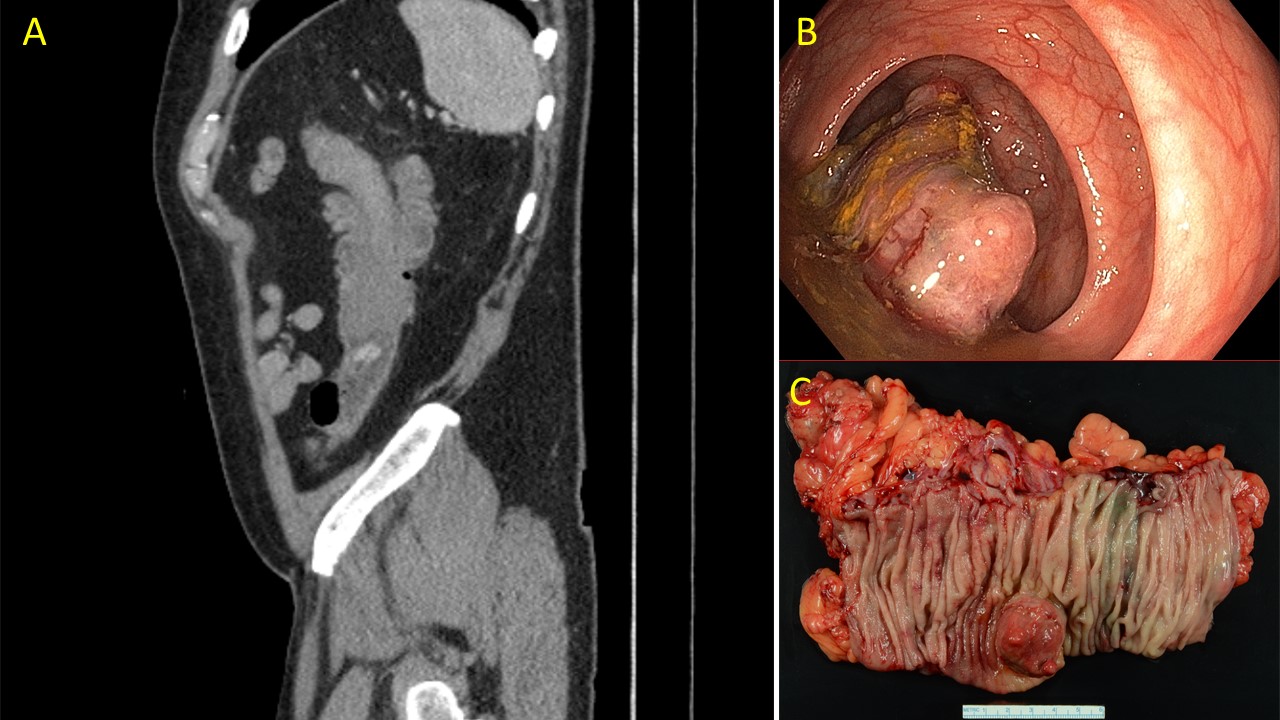