Introduction: Esophageal variceal hemorrhage (EVH) is a major complication of cirrhosis, often leading to shock and death. Management of EVH has markedly improved in recent decades, and hence it is essential to understand the ability of the current treatment options to effectively control bleeding. The aim of this study was to assess treatment patterns and outcomes in patients with EVH using real-world clinical data.

Methods: This was a multicenter, retrospective chart review of patients admitted to one of 18 hospitals in the United Kingdom during January 1, 2016 and September 30, 2019, within 24–36 hours of the start of bleeding. To be eligible, patients must have been ≥ 18 years at hospital admission, had a history of liver cirrhosis, complete hospital information from admission to discharge, and no prior history of EVH in 3 months. De-identified patient data extracted by physicians included patient demographics, clinical characteristics, treatment, and survival. The primary clinical outcome was failure to control bleeding within 36 hours and 5 days defined per Baveno V criteria.

Results: Among 195 patients that met inclusion criteria, average age was 52.1 years, and 34.4% were female. The EVH was the first occurrence in 96% of patients and alcoholic liver disease (69.2%) and non-alcoholic steatohepatitis/fatty liver disease (23.1%) were the most common underlying causes of cirrhosis. Excessive alcohol consumption (55.9%) and vomiting (34.4%) were the two most common precipitating events in all patients. Only 11.3% of patients were eligible for a liver transplant, 44.6% had encephalopathy, 32.3% had hepatorenal syndrome, and 50.8% had ascites. Nearly all patients (98.5%) were treated with terlipressin, for an average of 4.3 days. Over 88% patients received an antibiotic and 42.6% a beta-blocker. Most patients (84.1%) underwent band ligation. Based on Baveno V, 56.9% achieved a bleed control within 5 days, and 59.5% within 36 hours. Overall survival 70.5% at 12 months and 65.3% at 24 months. Median survival was not reached (Figure) after an average follow-up of about 11 months.

Discussion: In the United Kingdom, terlipressin is prescribed universally for patients with esophageal variceal bleeds. Data indicate that the current real-world treatment approach is able to control bleeding in more than half of the patients within 5 days. Overall survival was high and reflects the advances made in the management of variceal bleeding. 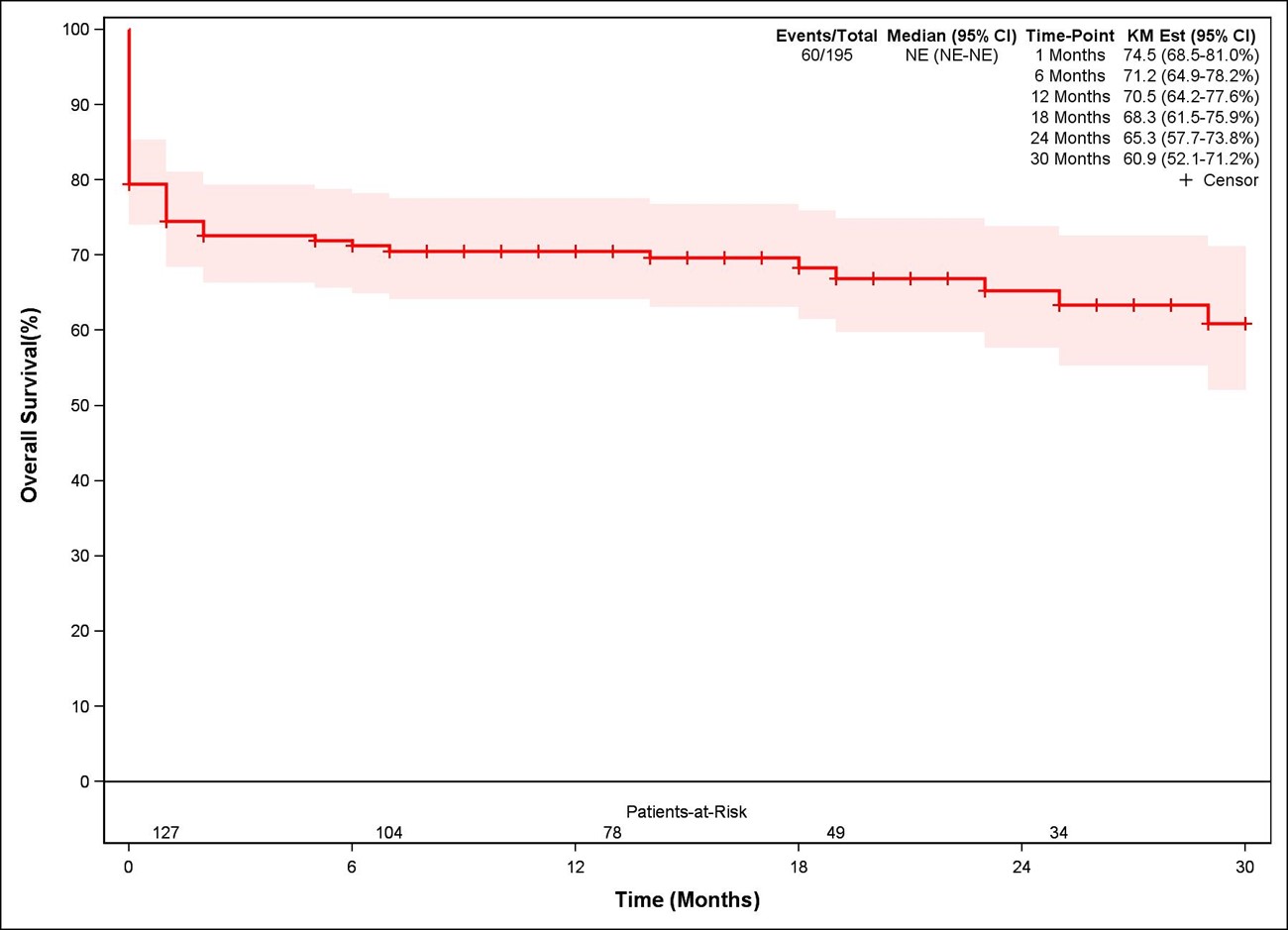