P0307 - In the Case of an Esophageal Food Impaction, Does the Time Between Symptom Onset and Endoscopy Start Time Influence the Duration and Difficulty of Esophagogastroduodenoscopy? 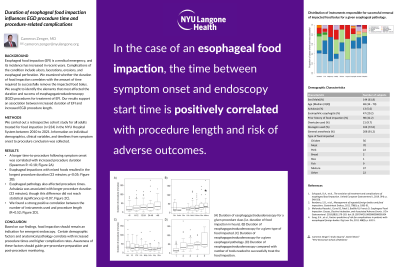 Introduction: Esophageal food impaction is considered a medical emergency and its incidence has increased in recent years. Potential complications of the condition are myriad: ulcers, lacerations, erosions, and esophageal perforation have all been documented in the literature. For this reason, the American Society for Gastrointestinal Endoscopy recommends removal of an esophageal impaction within 24 hours as delay decreases the likelihood of successful removal and increases the risk of complications. Other factors, such as duration of impaction and size of the ingested food bolus have also been independently associated with esophageal complications. We sought to identify the elements that most affected the duration and success of EGD procedures for treatment of esophageal food impaction.

Methods: We carried out a retrospective cohort study via review of the EHR for all adults treated for food impaction (n=230) in an academic medical center between 2010 to 2020. Information on individual demographics, clinical variables, and timelines from symptom onset to procedure conclusion was collected.

Results: Our data showed multiple items associated with increased EGD duration time for treatment of esophageal food impaction. A longer time-to-procedure following symptom onset was correlated (Spearman R =0.1836) with increased procedure duration. There was a similar positive correlation between the duration of the procedure and number of instruments used (R = 0.583). Types of pathology also affected procedure times. In patients with achalasia, the mean procedure duration was almost 54 minutes, while cases without identifiable underlying pathology took 21 minutes on average (p < 0.001). Types of pathology also affected which instruments were used. Endoscopists were much more likely to successfully remove the impaction with the rat tooth forceps in eosinophilic esophagitis than in other conditions studied.

Discussion: Knowledge of the factors most strongly associated with prolonged EGD procedure times for treatment of food impaction is highly advantageous for clinicians. For example, cognizance of the inherent complexity of treating an impaction in patients with achalasia may prompt the operator to place an overtube or to recommend general anesthesia in anticipation of the expected difficulty of the procedure. Likewise, understanding which instruments would be most useful in treating an impaction depending on etiology can reduce medical waste and minimize procedure time. 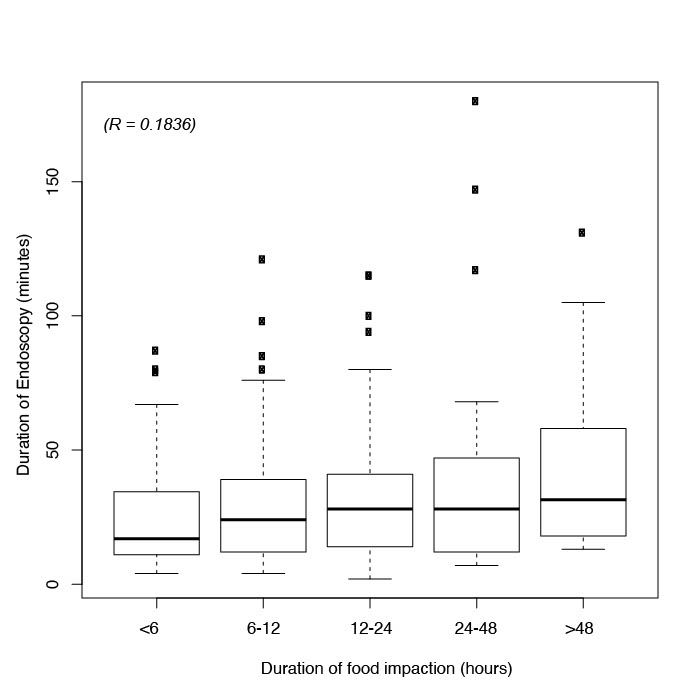 Figure: Duration of endoscopy in relation to duration of impaction prior to procedure. Spearman’s Rho was calculated across all available data points.