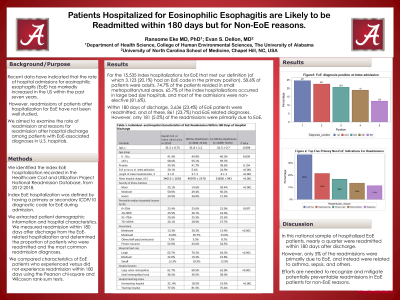 Introduction: Recent data have indicated that the rate of hospital admissions for eosinophilic esophagitis (EoE) has markedly increased in the US within the past seven years. However, readmissions of patients after hospitalization for EoE have not been well studied. We aimed to examine the rate of readmission and reasons for readmission after hospital discharge among patients with EoE-associated diagnoses in U.S. hospitals.

Methods: We identified the index EoE hospitalization recorded in the Healthcare Cost and Utilization Project National Readmission Database, from 2012-2018. Index EoE hospitalization was defined by having a primary or secondary ICD9/10 diagnostic code for EoE during admission. We extracted patient demographic information and hospital characteristics. We measured readmission within 180 days after discharge from the EoE-related hospitalization and determined the proportion of patients who were readmitted and the most common readmission diagnoses. We compared characteristics of EoE patients who experienced versus did not experience readmission within 180 days using the Pearson chi-square and Wilcoxon rank-sum tests.

Results: For the 15,535 index hospitalizations for EoE that met our definition (of which 3,123 (20.1%) had an EoE code in the primary position), 58.6% of patients were adults, 74.7% of the patients resided in small metropolitan/rural areas, 65.7% of the index hospitalizations occurred in large bed size hospitals, and most of the admissions were non-elective (81.6%). Within 180 days of discharge, 3,636 (23.4%) of EoE patients were readmitted, and of these, 861 (23.7%) had EoE related diagnoses. However, only 181 (5.0%) of the readmissions were primarily due to EoE. The 5 most common non-EoE reasons for readmission were Asthma (5.5%), septicemia (3.2%), non-cardiac chest pain (2.5%), volume depletion/dehydration (2.0%), diabetes (1.7%). Readmitted patients had higher severity of illness subclass, especially Medicaid and Medicare insurance, and had percentile median household income of less than 50 or below percentile.

Discussion: In this national sample of hospitalized EoE patients, nearly a quarter were readmitted within 180 days after discharge. However, only 5% of the readmissions were primarily due to EoE, and instead were related to asthma, sepsis, and others. Efforts are needed to recognize and mitigate potentially preventable readmissions in EoE patients for non-EoE reasons.