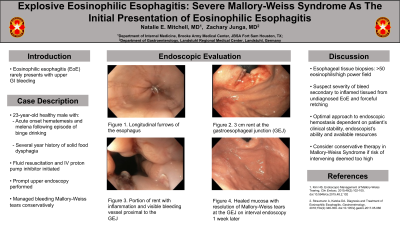 Case Description/Methods: A healthy 23 year-old male presented with acute onset of hematemesis and melena following an episode of binge drinking. The patient did endorse a several year history of intermittent solid food dysphagia but denied NSAID use. Vital signs were notable for tachycardia, abdominal examination was normal, and initial hemoglobin was normal but decreased to 8.8 g/dL following fluid resuscitation. Intravenous proton pump inhibitor (PPI) therapy was started and prompt upper endoscopy was performed, notable for linear furrows, microabscesses and trachealization of the esophagus. Additionally, multiple 2-3 cm rents with visible vessels were noted proximal to the gastroesophageal junction (GEJ). No interventions were undertaken due to the risk of re-bleeding, difficulty of maneuvering endoscopically at the GEJ, and lack of interventional radiology (IR) support. The patient was observed as an inpatient with continued PPI and anti-emetic therapy without evidence of re-bleeding. A second endoscopy was performed one week later; the rents demonstrated significant healing. Additionally, esophageal tissue biopsies demonstrated >50 eosinophils/high power field. The patient was discharged on twice daily PPI with plans for repeat endoscopy in 8 weeks but patient did not follow-up due to complete resolution of his symptoms with PPI.

Discussion: We suspect the severity of this patient’s bleed was secondary to underlying undiagnosed EoE. The inflamed tissues of the patient’s esophagus combined with forceful retching likely resulted in more severe esophageal mucosal and submucosal injury, explaining the severity of the patient’s bleeding and endoscopic findings. While visible vessels should normally be treated in the stomach related to ulcer bleeding, the decision to monitor the lesions along with medical treatment resulted in a good outcome. The risk of intervening and potentially causing further bleeding in an area that poses difficulties with maneuverability outweighed the benefit in our estimation. We would recommend conservative therapy in these cases, particularly if the patient is at a facility without IR support as was the case with our patient.