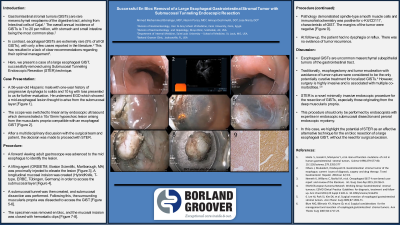 Introduction: Gastrointestinal stromal tumors (GISTs) are rare mesenchymal neoplasms of the digestive tract, arising from Intestinal cells of Cajal. The overall annual incidence of GISTs is 7 to 20 per million, with stomach and small intestine being the most common sites. In contrast, esophageal GISTs are extremely rare (5% of all GI GISTs), with only a few cases reported in the literature. This has resulted in a lack of clear recommendations regarding their optimal management. Here, we present a case of a large esophageal GIST, successfully removed using submucosal tunneling endoscopic resection (STER) technique.

Case Description/Methods: A 56-year-old Hispanic male with one-year history of progressive dysphagia to solids and 10 kg with loss presented to us for further evaluation. He underwent EGD which showed a mid-esophageal lesion thought to arise from the submucosal layer. Endoscopic ultrasound demonstrated a 10x15mm hypoechoic lesion arising from the muscularis propria. The optimal next step was to proceed with STER.

A forward viewing gastroscope was advanced to the mid esophagus to identify the lesion. A lifting agent was proximally injected to elevate the lesion. A longitudinal mucosal incision was created in order to access the submucosal layer. A submucosal tunnel was then created, and submucosal dissection was performed. Following this, the surrounding muscularis propria was dissected to access the GIST. The specimen was removed en bloc, and the mucosal incision was closed with hemostatic clips. Pathology demonstrated spindle-type smooth muscle cells and immunohistochemistry was positive for c-Kit/CD117, characteristic of GIST. The margins of the tumor were negative. At follow-up 4 weeks later, the patient had no dysphagia or reflux. There was no evidence of tumor recurrence.

Discussion: Esophageal GISTs are uncommon mesenchymal sub-epithelial tumors of the gastrointestinal tract. Traditionally, esophagectomy and tumor enucleation with avoidance of tumor rupture were considered to be the only potentially curative treatment for localized GISTs. However, surgery is highly invasive and is associated with multiple co-morbidities. STER is a novel minimally invasive endoscopic procedure for the resection of GISTs, especially those originating from the deep muscularis propria. This procedure should only be performed by endoscopists with expertise in endoscopic submucosal dissection and per-oral endoscopic myotomy. 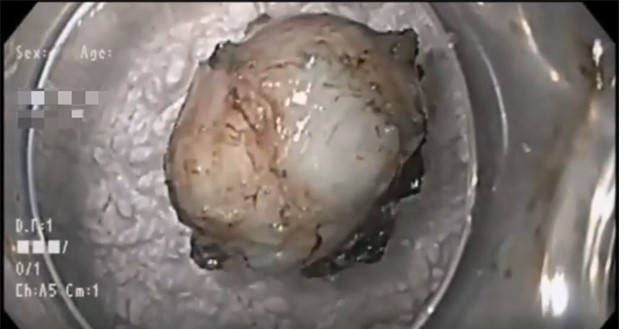