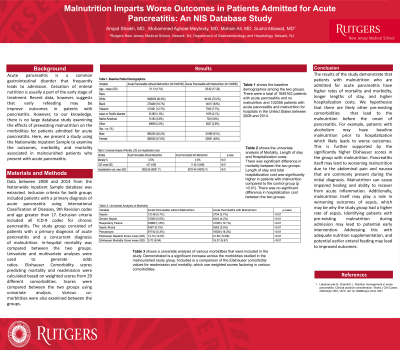 Introduction: Recent data suggests that early re-feeding may be improve outcomes in patents with pancreatitis. However, to our knowledge, there is no large database study examining the effects of preexisting malnutrition on patients admitted for acute pancreatitis. Here, we present a study using the Nationwide Inpatient Sample.

Results: There were a total of 1849162 patients in the control group and 102056 patients int he study group for hospitals in the United States between 2008 and 2014. There was a significant difference in hospital mortality between the study groups on univariate analysis. There was a significant difference (p < 0.05), with a higher mortality in patients with malnutrition. Patients with malnutrition also were found to develop sepsis, severe sepsis, septic shock, and respiratory at higher rates (3.7%, 4.2%, 2.5%, and 10.1% respectively, p < 0.05). In hospital mortality on multivariate analysis for the two groups was found not to be significant (p-0.88, OR = 1.004). Malnutrition patients had a significantly higher Elixhauser mortality (31.50 ± 14.66) and readmission (16.37 ± 9.67) scores as compared to patients without malnutrition mortality (3.70 ± 8.04) and readmission (14.10 ± 12.97) scores (p< 0.001), indicating a higher rate of co-morbidities.

Discussion: Patients with malnutrition appear to have higher rates of co-morbdites in patients admitted with acute pancreatitis. Likely, pre-existing malnutrition on admission is indicative of co-morbidities that worsen outcomes, as further evidenced by the significantly higher Elixhauser scores. Addressing malnutrition by optimizing nutritional status early on in admission may improve outcomes.