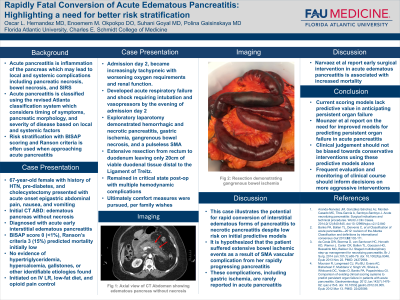 Introduction: Acute pancreatitis is a condition with complications stemming from direct injury by digestive enzymes and a systemic inflammatory response. Despite being well studied, the tools for risk-stratifying active acute pancreatitis remain unreliable. We present a case of rapidly progressive pancreatitis resulting in fatal complication despite an initial favorable classification.

Case Description/Methods: A 67-year-old female with a history of hypertension and pre-diabetes presented with a complaint of 4 hours of abdominal pain associated with nausea and vomiting. In the ED, CT ABD/Pelvis confirmed edematous pancreatic inflammation without evidence of necrosis and she was admitted for cute early mild interstitial edematous pancreatitis as per the revised Atlanta classification system. Her BISAP of 0 and Ranson score of 3 on admission reflected a low risk for mortality from her pancreatitis. She had no evidence of hypertriglyceridemia, hypercalcemia, or gallstones. The patient was initiated on IV fluids, a low-fat diet, and an opioid pain control regimen. By admission day 2, the patient became increasingly tachypneic with worsening renal function and abdominal distention. Rate of IV fluids was increased at this time as chest x-ray imaging did not show evidence of cardiopulmonary pathology. Her respiratory status continued to worsen overnight requiring intubation and multiple vasopressors for profound hypotension. Given her rapidly declining course and concern for necrotizing conversion, surgery was consulted for immediate exploratory laparotomy. Intraoperative findings included hemorrhagic pancreatitis with associated gastric ischemia, diffuse gangrenous bowel necrosis (Figure 1), and a pulseless SMA. She required extensive resection from rectum to duodenum leaving 20cm of viable duodenal tissue. The patient remained in critical state and ultimately comfort measures were pursued, per family wishes. It is hypothesized that the patient suffered extensive gastric ischemia despite triple vessel supply with bowel ischemia as a result of SMA vascular complication from her rapidly progressing pancreatitis. These complications are rarely reported in acute pancreatitis.

Discussion: This case illustrates the potential for rapid conversion of interstitial edematous forms of pancreatitis to necrotic pancreatitis associated with subsequent ischemic complications. We emphasize the need for updated risk stratification models for acute pancreatitis in order to improve prediction of severity in these patients. 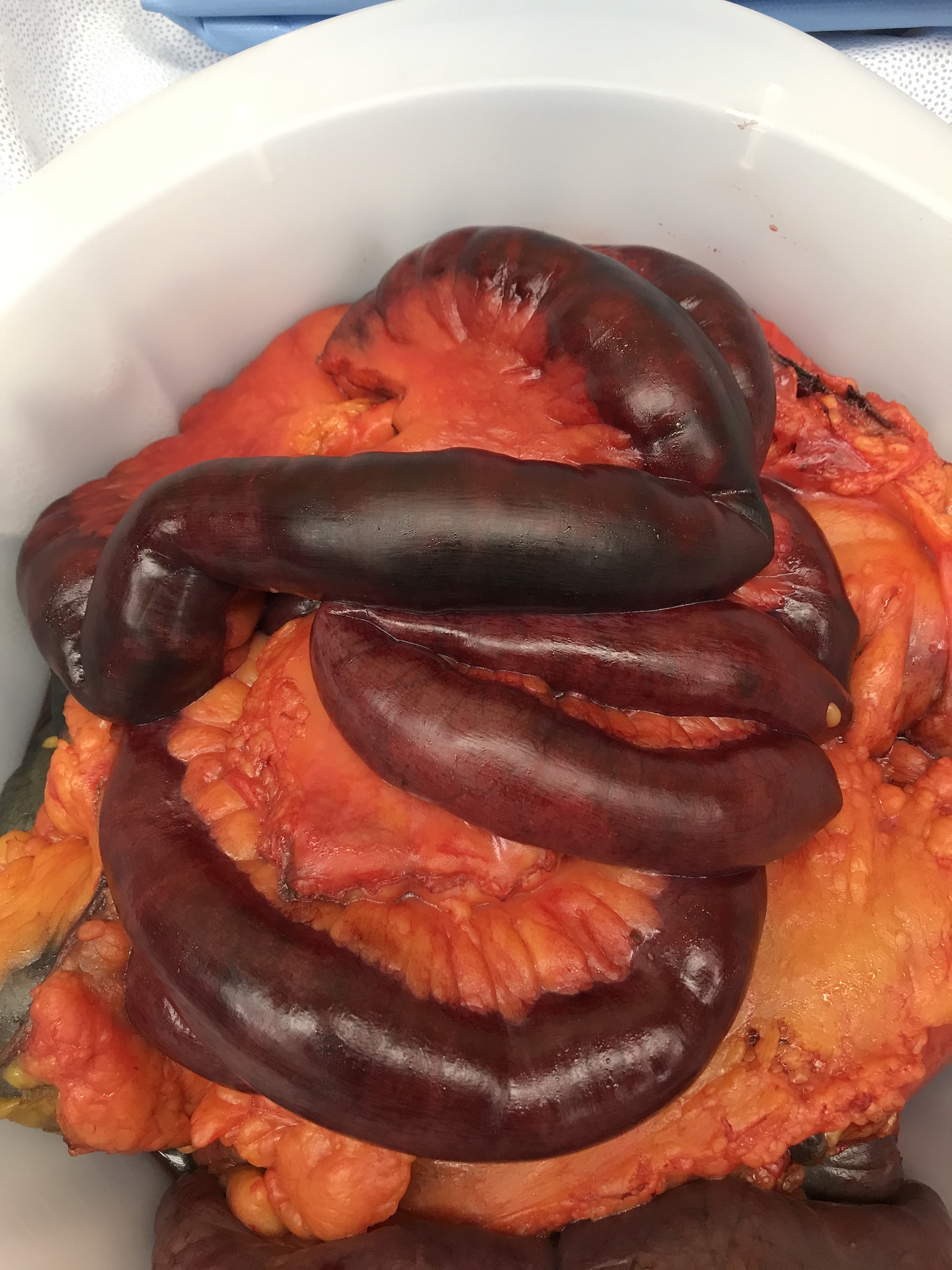