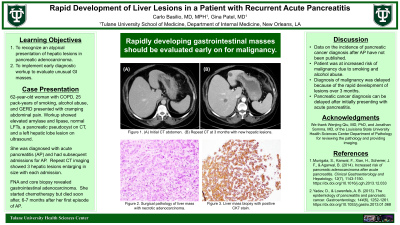 Introduction: Acute pancreatitis (AP) is increasing in incidence worldwide and hospital admissions are rising in the United States. The etiology is important to elucidate but may be difficult to confirm. This case describes a presentation of recurrent AP with a rapid development of liver lesions.

Case Description/Methods: A 62-year-old woman with COPD, 25 pack-years of smoking, alcohol abuse, and GERD initially presented with cramping abdominal pain that she never had before, as well as nausea. Exam showed tachycardia and epigastric and LUQ tenderness. Labs revealed elevated amylase and lipase, but AST, ALT, alkaline phosphatase, and triglycerides were normal. CT described a fluid collection in the pancreatic tail, determined to be a pseudocyst, but no pancreatic or hepatic lesions were noted. Ultrasound showed a 1.7 cm lesion at the left hepatic lobe. She was diagnosed with AP, treated with antibiotics and IV fluids, and later discharged.

She continued to have episodes of AP. One month after the initial CT, a repeat CT revealed the left hepatic lesion seen on the prior ultrasound, as well as 2 new hepatic lesions in the right lobe. With subsequent CT scans, the 3 hepatic lesions serially enlarged. Three months after her initial presentation, she had an unintentional weight loss of 30 lb. Labs showed alkaline phosphatase was 254 U/L, CEA was elevated (5.6 U/mL), normal CA 19-9 (17.4 U/mL) and AFP (2.5 ng/mL). CT showed that the lesions continued to enlarge. FNA and core biopsy of a liver lesion revealed pancreatic adenocarcinoma. She was then initiated on cisplatin and paclitaxel for chemotherapy.

Discussion: AP is a rare manifestation of pancreatic cancer, though the prevalence of this association is not well characterized. This patient’s AP was likely her initial presentation of pancreatic cancer, with increased risk due to her significant smoking and alcohol use. She was diagnosed within three months of initial presentation. She had no pancreatic lesions or evidence of chronic pancreatitis. The liver lesions were initially believed to be abscesses, more so than malignancy, due to their rapid development. Without evidence of primary pancreatic lesions, malignancy was not considered until later in this patient’s course, but she has since started chemotherapy. This case highlighted the importance of considering and working up malignancy, despite the unusual presentation of the rapidly progressive liver lesions.