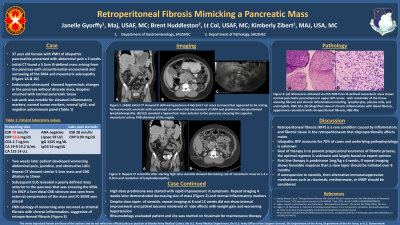 Introduction: Pancreatic lesions can be diagnostically challenging which can lead to extensive evaluations to mitigate the risk of a missed malignancy. We present an unexpected diagnosis in a patient with a pancreatic mass with features highly suspicious for malignancy on imaging.

Case Description/Methods: A 37-year-old female with a history of idiopathic pancreatitis presented with abdominal pain. CT showed an ill-defined 5.5cm mass arising from the uncinate process with associated long segment of circumferential encasement and narrowing of the SMA, occlusion of the SMV and splenic vein, and central mesenteric adenopathy. The CA 19-9, CEA, ANA were negative. IgG4 levels were normal but ESR and CRP returned elevated. Initial EUS showed focal hyperechoic changes in the head of the pancreas without discrete mass. Fine needle biopsy (FNB) returned with atypical cells and normal pancreatic tissue. Two weeks later the patient presented with RUQ pain and jaundice. Imaging showed CBD dilation and elevated LAES in an obstructive pattern. Repeat EUS did not show discrete pancreatic mass, but anterior to the pancreas there was a 5cm hypoechoic region encasing the SMA. An ERCP showed a 5cm distal CBD stricture, consistent with external compression and FC-SEMS was placed. Cytology from FNB returned as stromal fibrosis with chronic inflammation and eosinophils suggestive of retroperitoneal fibrosis. The patient was started on 60mg of prednisone daily with significant improvement of abdominal pain. Repeat imaging after 4 weeks showed decreasing size of the mass and improvement of inflammatory markers. A slow taper of steroids was initiated but subsequent imaging at 8 and 12 weeks showed unchanged size of mass with rising inflammatory markers. Patient remained asymptomatic but due to concern for progression she was referred to Rheumatology for consideration of steroid sparing therapy.

Discussion: Retroperitoneal fibrosis (RFP) is a rare condition classified by inflammatory and fibrotic tissue that can be mass-like, causing biliary compression and obstruction. Data is limited on the optimal therapy regimen and is largely based on observational studies and expert clinical opinion. There are no clinical trials comparing steroids with other immunosuppressive agents for initial therapy or the utility of combination therapy. Although this patient received an appropriate duration of high dose steroids she did not achieve remission and requires further medical management. 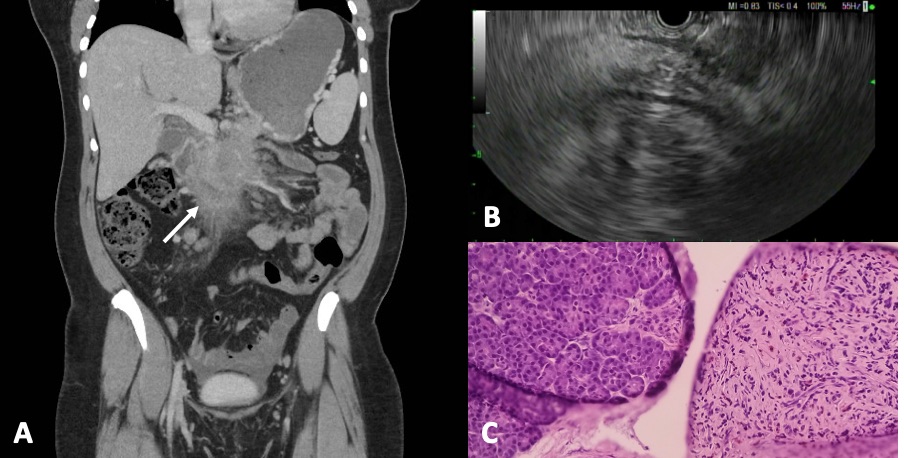