P1134 - A Rare Imitator: A Case of Painless Jaundice From Neuroendocrine Carcinoma Causing Obstruction of the Common Bile Duct 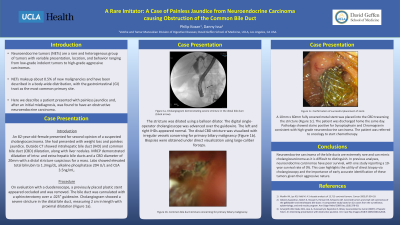 Introduction: Neuroendocrine tumors (NETs) are a rare and heterogenous group of tumors with variable presentation, location, and behavior ranging from low-grade indolent tumors to high-grade aggressive carcinomas. NETs makeup about 0.5% of new malignancies and have been described in a body-wide distribution, with the gastrointestinal (GI) tract as the most common primary site. Here we describe a patient presented with painless jaundice and, after an initial misdiagnosis, was found to have an obstructive neuroendocrine carcinoma.

Case Description/Methods: An 82 year-old-female presented for second opinion of a suspected cholangiocarcinoma. She had presented with weight loss and painless jaundice. Outside CT showed intrahepatic bile duct (IHD) and common bile duct (CBD) dilatation, along with liver nodules. MRCP demonstrated dilatation of intra- and extra-hepatic bile ducts and a CBD diameter of 20mm with a distal stricture suspicious for a mass. Labs showed elevated total bilirubin to 1.3mg/dL, alkaline phosphatase 204 U/L and CEA 3.5ng/mL.

On evaluation with a duodenoscope, a previously placed plastic stent appeared occluded and was removed. The bile duct was cannulated with a sphincterotomy over a .025” guidewire. Cholangiogram showed a severe stricture in the distal bile duct, measuring 2 cm in length with proximal dilatation (Figure 1a). The stricture was dilated using a balloon dilator. The digital single-operator cholangioscope was advanced over the guidewire. The left and right IHDs appeared normal. The distal CBD stricture was visualized with irregular vessels concerning for primary biliary malignancy (Figure 1b). Biopsies were obtained under direct visualization using a large-caliber forceps. A 10mm x 60mm fully covered metal stent was placed into the CBD traversing the stricture (Figure 1c). The patient was discharged home the same day. Pathology showed stains positive for Synaptophysin and Chromogranin consistent with high-grade neuroendocrine carcinoma. The patient was referred to oncology to start chemotherapy.

Discussion: Neuroendocrine carcinoma of the bile ducts is extremely rare and can mimic cholangiocarcinoma as it is difficult to distinguish. In previous analyses, neuroendocrine carcinomas have poor survival, with one study reporting a 10-year survival rate of 0%. This case highlights the utility of direct biopsy via cholangioscopy and the importance of early accurate identification of these tumors given their aggressive nature.