P1143 - Do All Walled off Pancreatic Necrosis (WOPN) Needs FNA Before Endoscopic Cystgastrostomy/Necrosectomy? A Pancreatic Cystic Neoplasm Finds Its Way Through LAMS into Stomach! 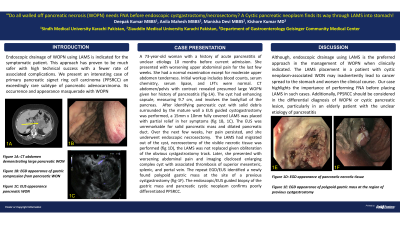 Introduction: Endoscopic drainage of WOPN using LAMS is indicated for the symptomatic patient. This approach has proven to be much safer with high technical success with a fewer rate of associated complications. We present an interesting case of primary pancreatic signet ring cell carcinoma (PPSRCC) an exceedingly rare subtype of pancreatic adenocarcinoma. Its occurrence and appearance masquerade with WOPN.

Case Description/Methods: A 73-year-old woman with a history of acute pancreatitis of unclear etiology 10 months before current admission. She presented with worsening upper abdominal pain for the last few weeks. She had a normal examination except for moderate upper abdomen tenderness. Initial workup includes blood counts, serum chemistry, serum lipase, and LFTs were normal. CT abdomen/pelvis with contrast revealed presumed large WOPN given her history of pancreatitis (fig-1a). The cyst had enhancing capsule, measuring 9.7 cm, and involves the body/tail of the pancreas. After identifying pancreatic cyst with solid debris surrounded by the mature wall a EUS guided cystogastrostomy was performed, a 15mm x 10mm fully covered LAMS was placed with partial relief in her symptoms (fig 1b, 1c). The EUS was unremarkable for solid pancreatic mass and dilated pancreatic duct. Over the next few weeks, her pain persisted, and she underwent endoscopic necrosectomy. The LAMS had migrated out of the cyst, necrosectomy of the visible necrotic tissue was performed (fig 1d), the LAMS was not replaced given lack/obliteration of obvious cystgastrostomy track. Later, she presented with worsening abdominal pain and imaging disclosed enlarging complex cyst with associated thrombosis of superior mesenteric, splenic, and portal vein. The repeat EGD/EUS identified a newly found polypoid gastric mass at the site of a previous cystgastrostomy (fig-1e). The endoscopic/EUS guided biopsy of the gastric mass and pancreatic cystic neoplasm confirms poorly differentiated PPSRCC.

Discussion: Although, endoscopic drainage using LAMS is the preferred approach in the management of WOPN when clinically indicated. The LAMS placement in a patient with cystic neoplasm-associated WON may inadvertently lead to cancer spread to the stomach and worsen the clinical course. Our case highlights the importance of performing FNA before placing LAMS in such cases. Additionally, PPSRCC should be considered in the differential diagnosis of WOPN or cystic pancreatic lesion, particularly in an elderly patient with the unclear etiology of pancreatitis.