P1165 - Primary Carcinosarcoma of the Gallbladder: An Unfortunate Fate From Anomalous Pancreaticobiliary Junction 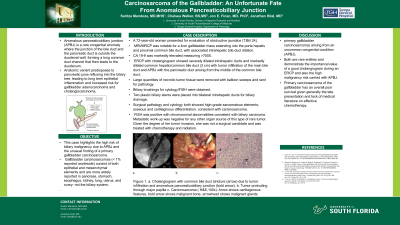 Introduction: Anomalous pancreaticobiliary junction (APBJ) is a rare congenital anomaly where the junction of the bile duct and the pancreatic duct is outside the duodenal wall, forming a long common duct channel that then leads to the duodenum. This anatomic variant predisposes to pancreatic juice refluxing into the biliary tree, leading to long term epithelial inflammation and increased risk for gallbladder adenocarcinoma and cholangiocarcinoma. This case highlights the high risk of biliary malignancy from this condition and the unusual finding of a primary gallbladder carcinosarcoma. Gallbladder carcinosarcomas (< 1% reported worldwide) consisting of both epithelial and mesenchymal elements. These are more widely reported in pancreas, stomach, esophagus, kidney, lung, uterus, and ovary- not the biliary system.

Case Description/Methods: A 72-year-old woman presented for evaluation of obstructive jaundice (T.Bili 24). MRI/MRCP was notable for a 4cm gallbladder mass extending into the porta hepatis and proximal common bile duct, with associated intrahepatic bile duct dilation. CA 19-9 was markedly elevated measuring >7000. ERCP with cholangiogram showed severely dilated intrahepatic ducts and markedly dilated common hepatic/common bile duct (3 cm) with tumor infiltration of the main bile duct and APBJ with the pancreatic duct arising from the middle of the common bile duct. Large quantities of necrotic tumor tissue were removed with balloon sweeps and sent for pathology. Biliary brushings for cytology/FISH were also obtained. Two plastic biliary stents were placed into bilateral intrahepatic ducts for biliary drainage. Surgical pathology and cytology both showed high-grade sarcomatous elements, osseous and cartilaginous differentiation, consistent with carcinosarcoma. FISH was positive with chromosomal abnormalities consistent with biliary carcinoma. Metastatic work-up was negative for any other organ source of this type of rare tumor. Given the degree of her tumor invasion, she was not a surgical candidate and was treated with chemotherapy and radiation.

Discussion: This is an uncommon malignancy (primary gallbladder carcinosarcoma) arising from an uncommon congenital condition (APBJ). Both are rare entities and demonstrate the importance/value of a good cholangiogram during an ERCP and also the high malignancy risk carried with APBJ. Primary carcinosarcoma of the gallbladder has an overall poor survival given generally the late presentation and lack of medical literature on effective chemotherapy.