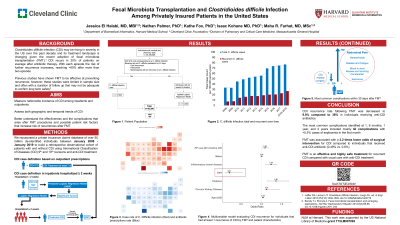 Introduction: Clostridioides difficile infection (CDI) continues to be a major health problem in United States, and the rise in the incidence of recurrent CDI remains of particular concern. Furthermore, the treatment landscape of CDI is changing with the recent adoption of fecal microbiota transplantation (FMT); however, national surveys of CDI and its treatment outcomes are challenged by the limited coverage of surveillance data and the limited use of FMT. The aim of this study is to assess the geographic and temporal trends of CDI and evaluate the safety and efficacy of FMT compared to the standard therapy on CDI recurrences.

Methods: We repurposed an administrative database of a private national managed care plan containing medical and prescription drug claims of over 50 million individuals spanning the years 2008-2019 to build a retrospective observational cohort of patients with and without CDI. We used International Classification of Disease (ICD) and prescription data to identify patients with CDI. We estimated trends over time in disease burden and FMT use and further evaluated complications up to 2 years after FMT using a phenome-wide association approach. We also assessed the effect of FMT on the risk for CDI recurrence using a multivariable-adjusted logistic regression.

Discussion: Using real-world healthcare data from a large US private national managed care plan, we show that FMT is strongly associated with a decrease in CDI recurrence compared with the standard care with tolerable complications up to 2 years.