P1179 - Disparities in Access to FMT at a Tertiary Care Center 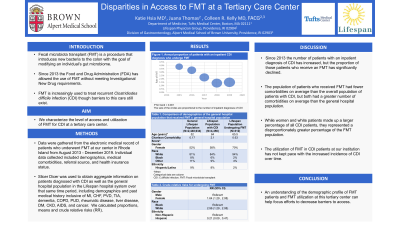 Introduction: Fecal microbiota transplant (FMT) is increasingly used to treat recurrent Clostridiodes difficile infection (CDI), though barriers to this care still exist. We characterize the level of access and utilization of FMT in CDI at a tertiary care center.

Results: Since 2013 the number of patients with an inpatient diagnosis of CDI has increased, but the proportion of those patients who receive an FMT has significantly declined (p for trend, 0.001; Table 1). From August 2013- December 2019, 312 patients received FMT for CDI. The population of patients who received FMT had fewer comorbidities on average than the overall population of patients with CDI, but both had a greater number of comorbidities on average than the general hospital population. While women and white patients made up a larger percentage of all CDI patients, they made up a considerably larger proportion of the FMT population. Among those with CDI, women were 63% more likely to undergo an FMT than men (RR: 1.64; 95% CI: 1.29, 2.08) and white patients were 3 times more likely than black patients to undergo an FMT (RR:2.96; 95% CI: 1.41,6.20). Among those with CDI, Hispanic patients were 79% less likely to undergo a FMT than non-Hispanic patients (RR: 0.21; 95% CI:0.09,0.47).

Discussion: The utilization of FMT in CDI patients at our institution has not kept pace with the increased incidence of CDI over time. An understanding of the demographic profile of FMT patients and FMT utilization at this tertiary center can help focus efforts to decrease barriers to access.