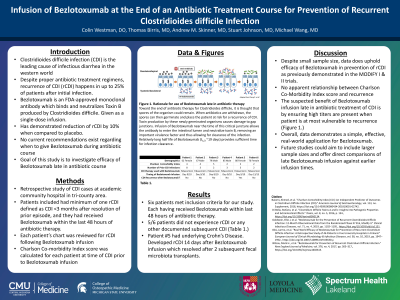 Introduction: Clostridioides difficile infection (CDI) is the leading cause of infectious diarrhea in the western world. Despite proper antibiotic treatment, recurrence is common, occurring in 25% of patients after first infection. The risk of recurrence increases with each subsequent episode. Bezlotoxumab is a monoclonal antibody given as adjuvant therapy directed against CD toxin B. The proposed mechanism is that it enters the intestinal lumen through damaged gap junctions and prevents recurrence by neutralizing toxin B produced by residual CD spores which germinate after cessation of antibiotics. In the MODIFY I/II trials, Bezlotoxumab reduced recurrent CDI (rCDI) in comparison to placebo by 10%. Moreover, sustained clinical cure at 12 weeks was achieved with Bezlotoxumab in 64% of subjects as compared to 54% of placebo-arm subjects. While timing of Bezlotoxumab administration was studied during the MODIFY I/II trial, there is a paucity of data regarding the timing of infusion in real world scenarios.

Methods: We performed a retrospective study of CDI cases at an academic community hospital in a tri-county area. Inclusion criteria included at least one prior rCDI, defined as CDI within less than three months of resolution of a prior episode, and having received infusion of Bezlotoxumab within 48 hours of final dose of antibiotic for rCDI. For these patients, metrics reviewed include whether rCDI occurred following Bezlotoxumab, patient characteristics including medical co-morbidities, and overall medical risk as denoted by Charlson Comorbidity Index.

Discussion: Infusion of Bezlotoxumab near the end of antibiotic therapy appears to be effective for prevention of rCDI in a real-world setting, and thus provides a simple regimen for treatment. We hypothesize that administration of Bezlotoxumab at the end of a treatment course maximizes its efficacy by ensuring a high antibody titer during the period of high risk for rCDI. Future studies should include higher number of patients and direct comparisons against patients receiving Bezlotoxumab earlier in CDI therapy.