Introduction: Disseminated histoplasmosis (DH) is a life-threatening condition occurring almost exclusively in immunocompromised (IC) patients. Although well described, gastrointestinal histoplasmosis (GH) is a rare disease that can manifest with non-specific GI symptoms including abdominal pain, nausea, diarrhea, and weight loss in about 3-12% of patients diagnosed with DH. Here we present a case of a previously healthy patient who was found to have a colonic mass and ultimately diagnosed with HIV and DH.

Case Description/Methods: A 47-year-old male with history of treated pulmonary tuberculosis (TB) presented with two months of lower abdominal pain associated with diarrhea, nausea, vomiting, and 30-pound weight loss. Physical examination was notable for right lower quadrant abdominal tenderness and palpable right inguinal mass. Labs revealed mild normocytic anemia, hypoalbuminemia, and elevated protein gap. CT scan of the abdomen and pelvis (CTAP) demonstrated cecal wall thickening with irregular enhancement concerning for malignancy (Figure 1a). Colonoscopy was performed and demonstrated an infiltrative non-obstructing large circumferential mass in the cecum and ascending colon (Figure 1b). Biopsies revealed ill-defined granulomatous inflammation without evidence of malignancy. Due to prior history of TB, MTB-PCR was performed and negative. Additional stains were pursued and a Grocott-Gomori methenamine silver (GMS) stain revealed yeast like forms with narrow based budding, suspicious for crypotococcal or histoplasma infection. HIV serologies were assessed and patient was found to be HIV positive. Urine histoplasma antigen was positive and cryptococcal antigen was negative. The patient was diagnosed with DH in the setting of HIV infection. He was treated with amphotericin B followed by itraconazole and ultimately started on antiretrovirals. Following treatment, his GI symptoms resolved and he has gained weight.

Discussion: This case of DH is a reminder that the differential diagnosis for a colonic mass goes beyond malignancy. Histoplasma infection typically occurs in IC individuals and manifests with pulmonary symptoms. In rare circumstances, the organism can disseminate, most commonly affecting the GI system. GH can be misdiagnosed as IBD, appendicitis, bowel obstruction, or malignancy, thus leading to unnecessary therapies and interventions. Overall, DH is a rare and life-threatening cause of non-malignant colonic masses and highlights the need for thinking broadly to prevent delay in diagnosis. 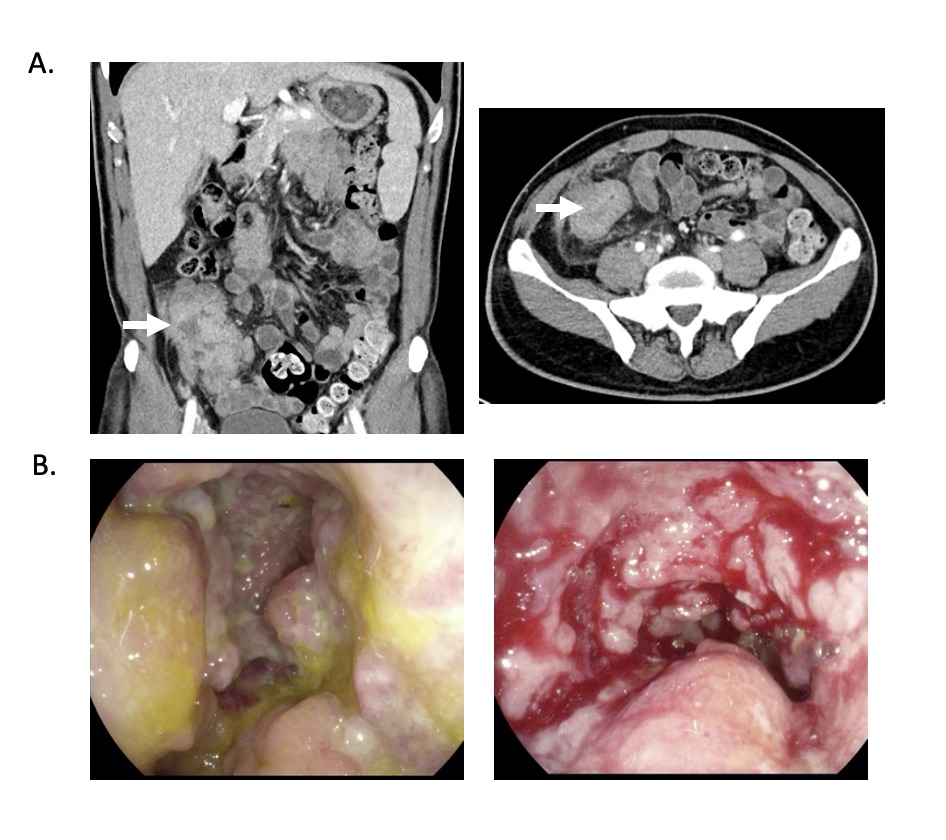