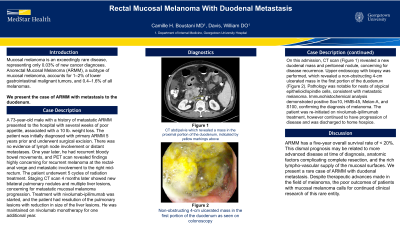 Introduction: Mucosal melanoma is an exceedingly rare disease, representing only 0.03% of new cancer diagnoses. Anorectal Mucosal Melanoma (ARMM), a subtype of mucosal melanoma, accounts for 1–2% of lower gastrointestinal malignant tumors, and 0.4–1.6% of all melanomas. We present the case of ARMM with metastasis to the duodenum.

Case Description/Methods: A 73-year-old male with a history of metastatic ARMM presented to the hospital with several weeks of poor appetite, associated with a 10 lb. weight loss. Regarding his oncological history, the patient was initially diagnosed with primary ARMM 5 years prior and underwent surgical excision. There was no evidence of lymph node involvement or distant metastases. One year later, he had recurrent bloody bowel movements, and PET scan revealed findings highly concerning for recurrent melanoma at the rectal-anal verge and metastatic involvement to the right mid-rectum. The patient underwent 5 cycles of radiation treatment. Staging CT scan 4 months later showed new bilateral pulmonary nodules and multiple liver lesions, concerning for metastatic mucosal melanoma progression. BRAF/CKIT mutation tests were negative. Treatment with nivolumab-ipilimumab was started, and the patient had resolution of the pulmonary lesions with reduction in size of the liver lesions. He was maintained on nivolumab monotherapy for one additional year. On this admission, CT scan revealed a new duodenal mass and peritoneal nodule, concerning for disease recurrence. Upper endoscopy with biopsy was performed, which revealed a non-obstructing 4-cm ulcerated mass in the first portion of the duodenum. Pathology was notable for nests of atypical epithelioid/spindle cells, consistent with metastatic melanoma. Immunohistochemical analysis demonstrated positive Sox10, HMB-45, Melan-A, and S100, confirming the diagnosis of melanoma. The patient was re-initiated on nivolumab-ipilimumab treatment, however continued to have progression of disease and was discharged to home hospice.

Discussion: ARMM has a five-year overall survival rate of < 20%. This dismal prognosis may be related to more advanced disease at time of diagnosis, anatomic factors complicating complete resection, and the rich lympho-vascular supply of the mucosal surfaces. We present a rare case of ARMM with duodenal metastasis. Despite therapeutic advances made in the field of melanoma, the poor outcomes of patients with mucosal melanoma calls for continued clinical research of this rare entity. 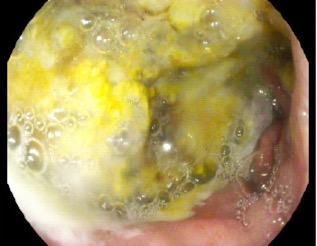 Figure: Non-obstructing 4-cm ulcerated mass in the first portion of the duodenum seen on upper endoscopy.