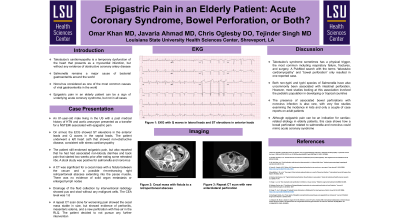 Introduction: Takotsubo’s cardiomyopathy is a temporary dysfunction of the heart that presents as a myocardial infarction, but without any evidence of obstructive coronary artery disease. Salmonella remains a major cause of bacterial gastroenteritis around the world, with norovirus considered as one of the most common causes of viral gastroenteritis in the world. How these three disease processes are involved together is seen in this case of an elderly patient with epigastric pain concerning for acute coronary syndrome.

Case Description/Methods: An 81-year-old male living in the US with a past medical history of HTN and aortic aneurysm presented as a transfer for a NSTEMI associated with epigastric pain. On arrival, the ECG showed ST elevations in the anterior leads and Q waves in the septal leads. The patient underwent a left heart cath that showed non-obstructive disease, consistent with stress cardiomyopathy. The patient still endorsed epigastric pain, but also reported that he had had associated non-bloody diarrhea and back pain that started two weeks prior after eating some reheated ribs. A stool study was positive for salmonella and norovirus. A CT was significant for a cecal mass with a fistula between the cecum and a possible rim-enhancing right retroperitoneal abscess extending into the psoas muscle. There was no evidence of solid organ metastasis or enlarged lymph nodes. Drainage of the fluid collection by interventional radiology showed pus and stool without any malignant cells. The CEA level was 1.6. A repeat CT scan done for worsening pain showed the cecal mass stable in size, but showed evidence of peritonitis, mesenteric edema, and a new perforation with free air in the RLQ. The patient decided to not pursue any further intervention.

Discussion: Takotsubo’s syndrome sometimes has a physical trigger, the most common including respiratory failure, fractures, and surgery. A PubMed search with the terms “takostubo cardiomyopathy” and “bowel perforation” only resulted in one reported case. Both non-typhi and typhi species of Salmonella have also uncommonly been associated with intestinal perforation. However, most studies looking at this association involved the pediatric population in developing or tropical countries. The presence of associated bowel perforations with norovirus infection is also rare, with very few studies examining the incidence in kids and only a couple of case reports on adult patients. This unique case shows how all three could be involved in a bowel perforation of an adult.