P1269 - A Case of Colonic Malakoplakia in an Immunocompromised Patient 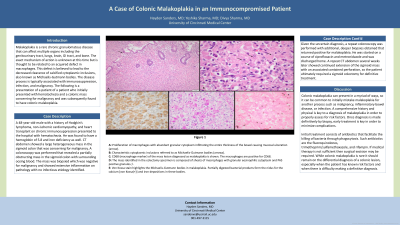 Introduction: Malakoplakia is a rare chronic granulomatous disease that can affect multiple organs including the genitourinary tract, lungs, brain, GI tract, and bone. The exact mechanism of action is unknown at this time, but is thought to be related to an acquired defect in macrophages. This defect is believed to lead to the decreased clearance of calcified cytoplasmic inclusions, also known as Michaelis-Gutmann bodies. The disease process is typically associated with immunosuppression, infection, and malignancy. The following is a presentation of a patient who initially presented with hematochezia and a colonic mass concerning for malignancy, and was subsequently found to have colonic malakoplakia.

Case Description/Methods: A 48-year-old-male with a history of Hodgkin's lymphoma, non-ischemic cardiomyopathy, and heart transplant presented to the hospital with hematochezia. He was found to have a hemoglobin of 5.8 and iron deficiency. CT abdomen showed a large heterogeneous mass in the sigmoid colon that was concerning for malignancy. Colonoscopy was performed that revealed a partially obstructing mass in the sigmoid colon with surrounding oozing. The mass was biopsied which was negative for malignancy and showed extensive inflammation with no infectious cause identified. Given the uncertain diagnosis, a repeat colonoscopy was performed and deeper biopsies were obtained that showed malakoplakia. He was started on a course of ciprofloxacin/metronidazole and was discharged home. Repeat CT abdomen showed continued extension of the sigmoid mass with a contained perforation, and the patient ultimately required a sigmoid colectomy for definitive treatment.

Discussion: Colonic malakoplakia can present in a myriad of ways, so it can be common to initially mistake malakoplakia for another process such as malignancy, IBD, or infection. A comprehensive history and physical is key to diagnosis of malakoplakia in order to properly assess for risk factors. Once diagnosis is made definitively by biopsy, early treatment is key to minimize complications. Initial treatment consists of antibiotics that facilitate the killing of bacteria by phagocytosis. Such antibiotics are the fluoroquinolones, trimethoprim/sulfamethoxazole, and rifampin. If medical therapy is not sufficient then surgical excision may be required. While colonic malakoplakia is rare it should remain on the differential diagnosis of a colonic lesion, especially when the patient has known risk factors and when there is difficulty making a definitive diagnosis. Figure: A: Proliferation of macrophages with abundant granular cytoplasm infiltrating the entire thickness of the bowel causing mucosal ulceration (arrow).
B: Characteristic cytoplasmic inclusions referred to as Michaelis-Gutmann bodies (arrows).
C: CD68 (macrophage marker) of the mass lesion diagnosed as malakoplakia is shown. The macrophages are positive for CD68.
D: The mass identified in the colectomy specimen is composed of sheets of macrophages with granular eosinophilic cytoplasm and PAS positive
granules
E: Von Kossa stain highlights the Michaelis-Gutmann bodies in malakoplakia. Partially digested bacterial products form the nidus for the calcium [von
Kossa (+)] and iron depositions in these bodies.