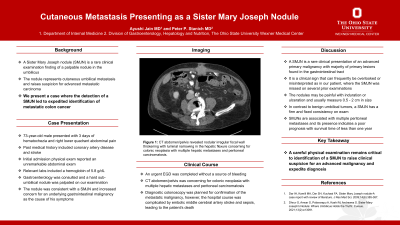 Introduction: A Sister Mary Joseph nodule (SMJN) is a rare clinical examination finding of a palpable nodule in the umbilicus that represents cutaneous umbilical metastasis. This finding raises suspicion for advanced metastatic carcinoma, most commonly with a primary gastrointestinal malignancy. We present a case where the detection of a SMJN led to expedited identification of metastatic colon cancer.

Case Description/Methods: A 73-year-old male with history of coronary artery disease and stroke presented as a transfer from an outside hospital with three days of hematochezia and dull right lower quadrant abdominal pain. Symptoms were associated with generalized weakness and dyspnea. Hemoglobin was found to be 5.8 g/dL. Initial admission documentation reported unremarkable abdominal exams. Gastroenterology was consulted and a hard sub-umbilical nodule was palpated on our examination. This was consistent with a SMJN and increased concern for an underlying gastrointestinal malignancy as the cause of his symptoms. An urgent EGD was completed without a source of bleeding. CT abdomen/pelvis was performed as the next step and revealed nodular irregular focal wall thickening with luminal narrowing in the hepatic flexure concerning for colonic neoplasia with multiple hepatic metastases and peritoneal carcinomatosis. The SMJN was visible on CT as an increased soft tissue density underneath the umbilicus (Figure 1). Diagnostic colonoscopy was planned for confirmation of the metastatic malignancy, however, the hospital course was complicated by embolic middle cerebral artery stroke and sepsis, leading to the patient’s death.

Discussion: A SMJN is a rare clinical presentation of an advanced primary malignancy with the majority of primary lesions found in the gastrointestinal tract. It is a clinical sign that can frequently be overlooked or misinterpreted as in our patient, where the SMJN was missed on several prior examinations. A SMJN may be painful with induration or ulceration and usually measures 0.5-2 cm in size. In contrast to benign umbilical tumors, a SMJN has a firm and fixed consistency on exam. On imaging, it is seen as a well-defined subcutaneous enhancing lesion. SMJNs are associated with multiple peritoneal metastasis and its presence indicates a poor prognosis with survival time of less than one year. A careful physical examination remains critical to identification of a SMJN to raise clinical suspicion for an advanced malignancy and expedite diagnosis. 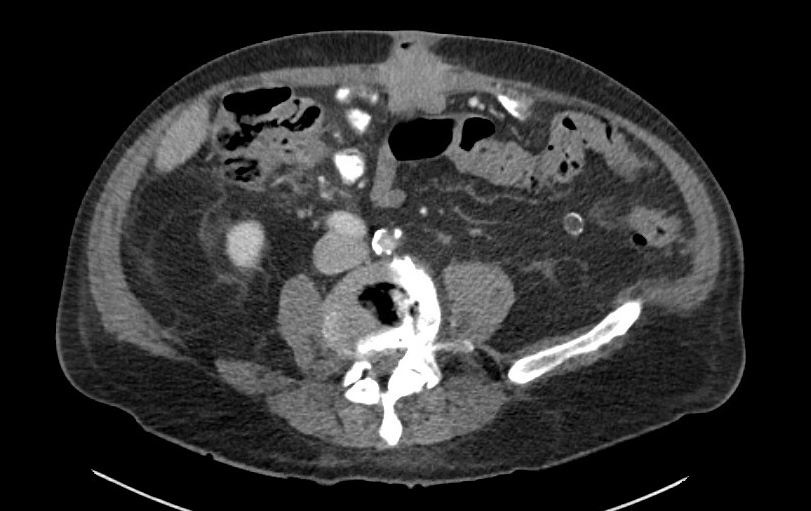