P1273 - Endometriosis Presenting as a Mass at the Hepatic Flexure 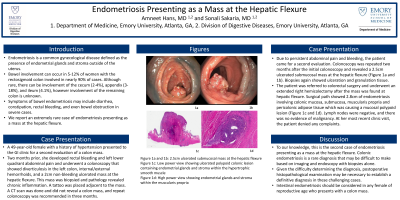 Introduction: Endometriosis is a common gynecological disease defined as the presence of endometrial glands and stroma outside of the uterus. Bowel involvement can occur in 5-12% of women with the rectosigmoid colon involved in nearly 90% of cases. Although rare, there can be involvement of the cecum (2-4%), appendix (3-18%), and ileum (4.1%), however involvement of the remaining colon is unknown. Symptoms of bowel endometriosis may include diarrhea, constipation, rectal bleeding, and even bowel obstruction in severe cases. We report an extremely rare case of endometriosis presenting as a mass at the hepatic flexure.

Case Description/Methods: A 49-year-old female with a history of hypertension presented to the gastroenterology clinic for a second evaluation of a colon mass. Two months prior, she developed rectal bleeding and left lower quadrant abdominal pain and underwent a colonoscopy that showed diverticulosis in the left colon, internal/external hemorrhoids, and a 2cm non-bleeding ulcerated mass at the hepatic flexure. This mass was biopsied, and pathology revealed chronic inflammation. A tattoo was placed adjacent to the mass. A CT scan did not reveal a colon mass, and repeat colonoscopy was recommended in three months. Due to persistent abdominal pain and bleeding, the patient came for a second evaluation. Colonoscopy was repeated two months after the initial colonoscopy and revealed a 2.5cm ulcerated submucosal mass at the hepatic flexure (Figure 1a and 1b). Biopsies again showed ulceration and granulation tissue. The patient was referred to colorectal surgery and underwent an extended right hemicolectomy after the mass was found at hepatic flexure. Surgical path showed 2.8cm of endometriosis involving colonic mucosa, submucosa, muscularis propria and pericolonic adipose tissue which was causing a mucosal polypoid lesion (Figure 1c and 1d). Lymph nodes were negative, and there was no evidence of malignancy. At her most recent clinic visit, the patient denied any complaints.

Discussion: To our knowledge, this is the second case of endometriosis presenting as a mass at the hepatic flexure. Colonic endometriosis is a rare diagnosis that may be difficult to make based on imaging and endoscopy with biopsies alone. Given the difficulty determining the diagnosis, postoperative histopathological examination may be necessary to establish a definitive diagnosis in these challenging cases. Intestinal endometriosis should be considered in any female of reproductive age who presents with a colon mass. 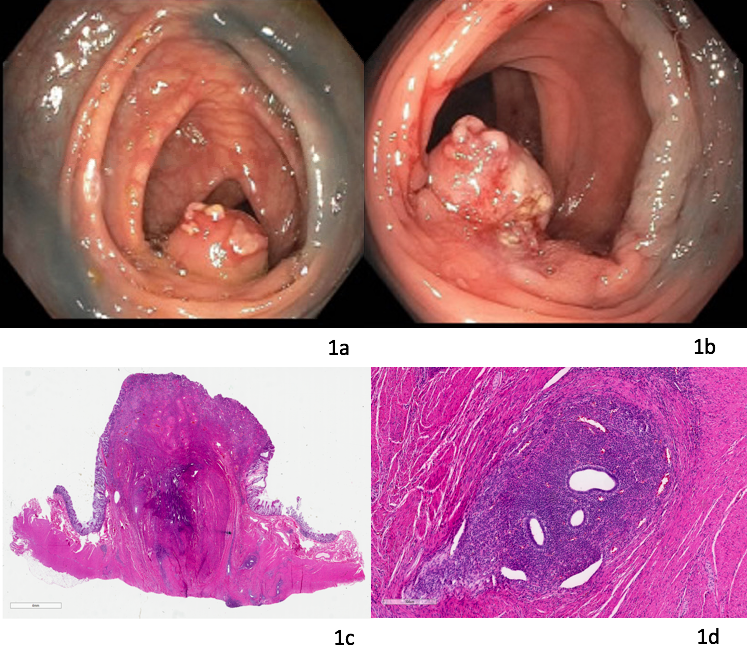