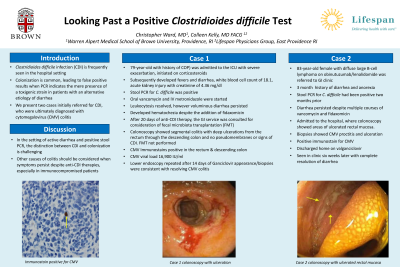 Introduction: Clostridioides difficile infection (CDI) is frequently seen in the hospital setting, however colonization with the organism is common, leading to false positive results when polymerase chain reaction (PCR) indicates the mere presence of a toxigenic strain in patients with an alternative etiology of diarrheal symptoms. We present two cases initially referred for CDI, who were ultimately diagnosed with cytomegalovirus (CMV) colitis.

Case Description/Methods: Case 1: A 79-year-old female with history of chronic obstructive pulmonary disease (COPD) was admitted to the intensive care unit with COPD exacerbation and renal failure. She was treated with corticosteroids. She subsequently developed fevers and diarrhea, white blood cell count of 18.1 K/uL, acute kidney injury with creatinine of 4.36 mg/dl, and stool PCR for C. difficile was positive. Oral vancomycin and IV metronidazole were started. Although leukocytosis resolved, voluminous diarrhea persisted and she developed hematochezia despite the addition of fidaxomicin. After 20 days of anti-CDI therapy, the gastroenterology (GI) service was consulted for consideration of fecal microbiota transplantation (FMT). Colonoscopy showed segmental colitis with deep ulcerations from the rectum through the descending colon and no pseudomembranes or signs of CDI (image 1). FMT was not performed. Immunostains for CMV were positive in the rectum and descending colon. CMV viral load was 16,900 IU/ml. Lower endoscopy was repeated after 14 days of Ganciclovir and the appearance/biopsies were consistent with resolving CMV colitis.

Case 2: An 83-year-old female with diffuse large B-cell lymphoma on obinutuzumab/lenalidomide was referred to GI clinic with a three-month history of diarrhea and anorexia. Stool PCR for C. difficile had been positive two months prior and diarrhea persisted despite multiple courses of vancomycin and fidaxomicin. She was admitted to the hospital, where colonoscopy showed areas of ulcerated rectal mucosa. Biopsies showed CMV proctitis and ulceration, with positive immunostain for CMV. She was discharged home on valganciclovir and seen in clinic six weeks later with complete resolution of her diarrhea.

Discussion: In the setting of active diarrhea and positive stool PCR, the distinction between CDI and colonization can be extremely challenging. Other causes of colitis should be considered when symptoms persist despite anti-CDI therapies, especially in immunocompromised patients. We present two cases of CMV colitis masquerading as CDI. 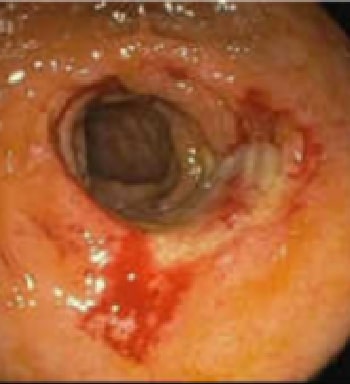