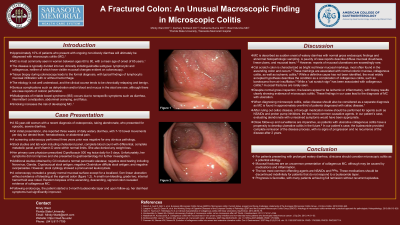 Introduction: Approximately 10% of patients who present with ongoing, non-bloody diarrhea will ultimately be diagnosed with microscopic colitis. Oftentimes, patients will initially present with nonspecific symptoms.The etiology of the disease is not well understood and the clinical course of the disease does tend to be chronically relapsing and benign. We report a rare case of a 62-year-old woman found to have collagenous colitis with mucosal ulceration in the sigmoid colon. This lesion was present in the absence of any other type of disease.

Case Description/Methods: A 62-year-old woman without significant past medical history initially presented for episodic, severe diarrhea. The patient had recently started alendronate. Pertinently, she underwent a screening colonoscopy three years prior, which was negative for any obvious pathology. Since that time, she has taken several supplements including probiotics and turmeric. Her first evaluation in October 2020 was notable for three weeks of 7-10 episodes of severe diarrhea daily. The patient's symptoms persisted despite antibiotics, the patient agreed to colonoscopy for further investigation.

Endoscopic findings revealed grossly normal mucosal surface except for a localized, approximately 5cm colonic fracture found at the sigmoid colon (figure 1), which was biopsied. There was no evidence of bleeding along the ulceration or elsewhere in the terminal ileum or rectal vault. Biopsies from each site (ascending, descending, sigmoid) revealed evidence of collagenous microscopic colitis.

Discussion: Microscopic Colitis is described as a sudden onset of watery diarrhea with normal gross endoscopic findings and abnormal histopathologic sampling. Any form of gross mucosal involvement, particularly ulcerations, has rarely been reported. There has been a paucity of other case reports describing diffuse mucosal cloudiness, linear ulcers, and mucosal tears. Upon gross inspection, the lesion appeared to be ischemic or some type of inflammatory bowel disease. However, biopsy results taken clearly showed evidence of microscopic colitis, leading to the diagnosis of microscopic colitis with ulceration. After ruling out celiac disease, a thorough medication review should be performed for agents such as NSAIDs and proton pump inhibitors. In this patient’s case, the budesonide taper ultimately resolved the symptoms. However, if this were ineffective or symptoms recur, it would be reasonable to discontinue other possibly offending agents such as alendronate. 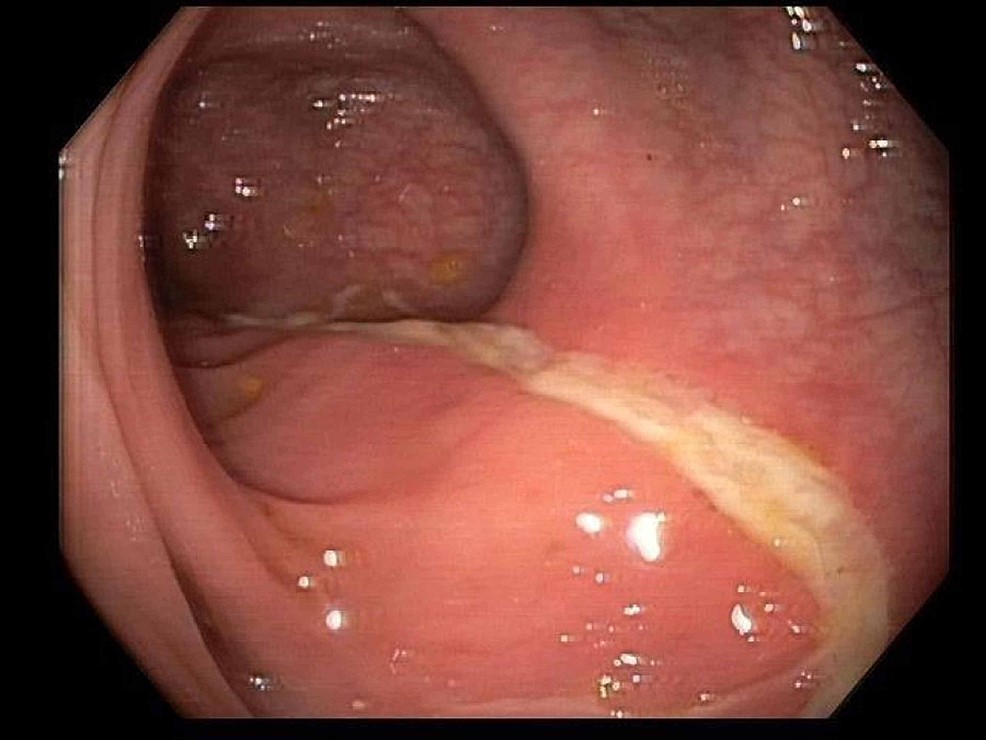 Figure: Mucosal fracture in the sigmoid colon, found to be collagenous microscopic colitis.