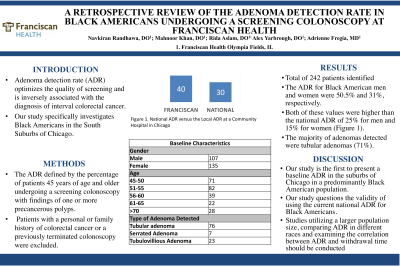 Introduction: Colorectal cancer is the third most common cancer in the world. When compared to the Caucasian counterpart, the rate of incidence is 24% and 19% higher in Black American men and women, respectively. While there are a variety of screening modalities available, colonoscopies remain the gold standard for diagnosis. Adenoma detection rate (ADR) optimizes the quality of screening and is inversely associated with the diagnosis of interval colorectal cancer. Several studies have examined ADR, however, this study is unique and specifically investigates Black Americans in the South Suburbs of Chicago.

Methods: A retrospective chart review utilizing EPIC was performed to evaluate the baseline ADR in the Black American population at Franciscan Health from December 2018 to December 2020. The ADR was defined by the percentage of patients 45 years of age and older undergoing a screening colonoscopy with findings of one or more precancerous polyps. Patients with a personal or family history of colorectal cancer or a previously terminated colonoscopy were excluded.

Results: A total of 242 patients were identified and 34% were within the 51 to 55 years of age category (Table 1). The baseline total ADR for this population was found to be 40% compared to the national ADR of 30%. The ADR for Black American men and women were 50.5% and 31%, respectively. Both of these values were higher than the national ADR of 25% for men and 15% for women (Figure 1). The majority of adenomas detected were tubular adenomas (71%).

Discussion: ADR is a quality improvement measure that improves colon cancer detection, prevention and treatment. Our study is the first to present a baseline ADR in the suburbs of Chicago in a predominantly Black American population. The ADR within this community hospital was greater than the national ADR which supports screening Black Americans by at least 45 years of age, if not younger. However, it also questions the validity of using the current national ADR for Black Americans. Further studies exploring the different subtypes of adenomas that are detected as well as comparing the ADR in Hispanics and Asians are needed.

Figure: National ADR versus the Local ADR at a Community Hospital in Chicago