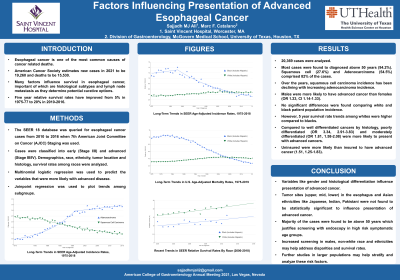 Introduction: Esophageal cancer is one of the most common causes of cancer related deaths. American Cancer Society estimates new cases in 2021 to be 19,260 and deaths to be 15,530. Many factors influence survival in esophageal cancer, important of which are histological subtypes and lymph node metastasis as they determine potential curative options. Five year relative survival rates have improved from 5% in 1975-77 to 20% in 2010-2016.

Methods: The SEER 18 database was queried for esophageal cancer cases from 2010 to 2016 when 7th American Joint Committee on Cancer (AJCC) Staging was used. Cases were classified into early (Stage I/II) and advanced (Stage III/IV). Demographics, race, ethnicity, tumor location and histology, survival rates among races were analyzed. Multinomial logistic regression was used to predict the variables that were more likely with advanced disease. Joinpoint regression was used to plot trends among subgroups.

Results: 20,369 cases were analyzed. Most cases were found to diagnosed above 50 years (94.2%). Squamous cell (27.6%) and Adenocarcinoma (54.5%) comprised 82% of the cases. Over the years, squamous cell carcinoma incidence has been declining with increasing adenocarcinoma incidence. Males were more likely to have advanced cancer than females (OR 1.23, CI 1.14-1.33). No significant differences were found comparing white and black patient population incidence. However, 5 year survival rate trends among whites were higher compared to blacks. Compared to well differentiated cancers by histology, poorly differentiated (OR 3.34, 2.91-3.83) and moderately differentiated (OR 1.81, 1.58-2.08) were more likely to present with advanced cancers. Uninsured were more likely than insured to have advanced cancer (1.51, 1.25-1.83).

Discussion: Variables like gender and histological differentiation influence presentation of advanced cancer. Tumor sites (upper, mid, lower) in the esophagus and asian ethnicities like Japanese, Indian, Pakistani were not found to be statistically significant to influence presentation of advanced cancer. Majority of the cases were found to be above 50 years which justifies screening with endoscopy in high risk symptomatic age groups. Increased screening in males, non-white race and ethnicities may help address disparities and survival rates. Further studies in larger populations may help stratify and analyze these risk factors.