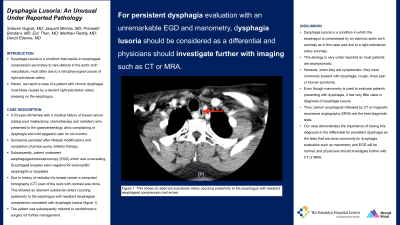 Introduction: Dysphagia lusoria is a condition that results in esophageal compression secondary to rare defects in the aortic arch vasculature, most often due to a retropharyngeal course of right subclavian artery. Herein, we report a case of patient with chronic dysphagia most likely caused by a deviant right subclavian artery pressing on the esophagus.

Case Description/Methods: A 53-year-old female with a medical history of breast cancer (status post mastectomy, chemotherapy and radiation) who presented to the gastroenterology clinic complaining of dysphagia and mild epigastric pain for six months. Symptoms persisted after lifestyle modifications and completion of proton pump inhibitor therapy. Subsequently, patient underwent esophagogastroduodenoscopy (EGD) which was unrevealing. Esophageal biopsies were negative for eosinophilic esophagitis or dysplasia. Due to history of radiation for breast cancer, a computed tomography (CT) scan of the neck with contrast was done. This showed an aberrant subclavian artery coursing posteriorly to the esophagus with resultant esophageal compression consistent with dysphagia lusoria (figure 1). The patient was subsequently referred to cardiothoracic surgery for further management.

Discussion: Dysphagia lusoria is described when the esophagus is compressed by an extrinsic aortic arch anomaly as in this case was due to a right subclavian artery anomaly. This etiology is very under reported as most patients are asymptomatic. However, when they are symptomatic, they most commonly present with dysphagia, cough, chest pain or Horner syndrome. Even though manometry is used to evaluate patients presenting with dysphagia, it has very little value in diagnosis of dysphagia lusoria. Thus, barium esophagogram followed by CT or magnetic resonance angiography (MRA) are the best diagnostic tests. Our case demonstrates the importance of having this diagnosis in the differential for persistent dysphagia as the tests that are done commonly for dysphagia evaluation such as manometry and EGD could be normal, and physicians should investigate further with CT or MRA. 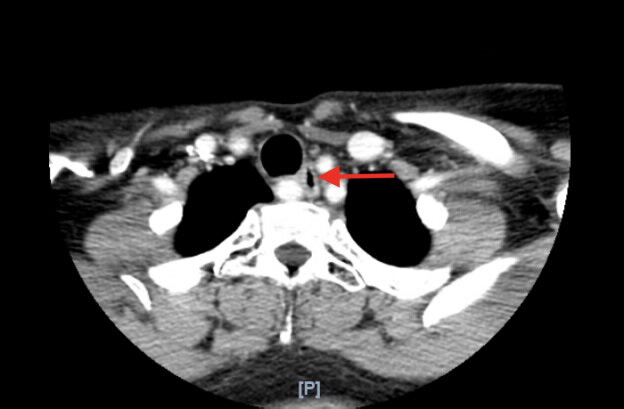