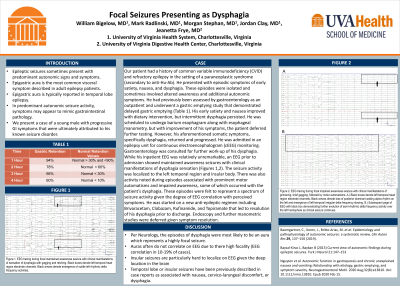 Introduction: We present a 19-year-old male admitted to the hospital for progressive episodes of early satiety, nausea, and dysphagia. This case demonstrated a rare manifestation of GI symptoms emanating from a complicated underlying medical history that mimicked motility pathology.

Case Description/Methods: Our patient had a past medical history significant for common variable immunodeficiency (CVID) and refractory epilepsy in the setting of a paraneoplastic syndrome (secondary to anti-Hu-Ab). His episodic symptoms were isolated and sometimes involved altered awareness and additional autonomic symptoms. He had previously been assessed by gastroenterology as an outpatient and underwent a gastric emptying study that showed delayed gastric emptying. The symptoms of early satiety and nausea improved with dietary intervention, but intermittent dysphagia persisted. He was scheduled to undergo barium esophagram along with esophageal manometry. However, with improvement of his symptoms, the patient deferred further testing.


Due to progression of aforementioned somatic symptoms, he was admitted in an epilepsy unit for continuous electroencephalogram (EEG). Gastroenterology was consulted for further work up of dysphagia. While his inpatient EEG was relatively unremarkable, an EEG prior to admission showed maintained awareness seizures with clinical manifestations of dysphagia sensation [Figure 1]. The seizure activity was localized to the left temporal region and insular body. There was also activity noted during episodes associated with prominent motor automatisms and impaired awareness, some of which occurred with the patient’s dysphagia. These episodes were felt to represent a spectrum of seizure activity given the degree of EEG correlation with perceived symptoms. He was started on a new anti-epileptic regimen including Brivaracetam, Clobazam, Rufinamide, and Topiramate that led to resolution of his dysphagia prior to discharge. Endoscopy and further manometric studies were deferred given symptom resolution.

Discussion: Per the neurology service, the episodes of dysphagia were felt to be an aura, which represents a highly focal seizure. Given the highly focal nature of these seizures, auras often do not correlate on EEG (correlation on EEG in 10-19% of cases). Temporal lobe or insular seizures have been found in previous case reports to be associated with nausea, cervico-laryngeal discomfort, or dysphagia. Insular seizures can be particularly hard to localize on EEG given the insula's deep location in the brain.