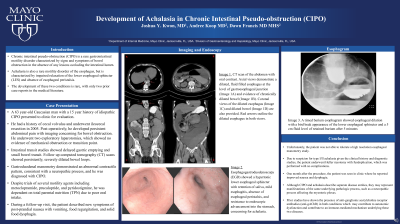 Introduction: Chronic intestinal pseudo-obstruction (CIPO) is a rare gastrointestinal motility disorder characterized by signs and symptoms of partial or complete bowel obstruction in the absence of any lesions obstructing the intestinal lumen. Achalasia is a rare esophageal motility disorder, characterized by impaired relaxation of the lower esophageal sphincter. These diseases are rarely reported together.

Case Description/Methods: A 63 year-old Caucasian man with a 15 year history of idiopathic chronic intestinal pseudo-obstruction (CIPO) presented to Gastroenterology clinic for follow-up. Regarding his CIPO, he had failed trials of several motility agents including metoclopramide, prucalopride, and pyridostigmine. Consequently, he had been dependent on total parental nutrition for the last 10 years due to symptoms and poor oral intake. During the follow up visit, the patient reported new symptoms of post-prandial reflux, nausea, vomiting, and dysphagia. Computed tomography (CT) of the abdomen showed dilation of the distal thoracic esophagus and retention of oral contrast with narrowing of the gastroesophageal junction. Other findings included chronically dilated small bowel to the level of the terminal ileum, consistent with prior imaging and diagnosis of CIPO. A timed barium esophagram showed esophageal dilation with a bird beak appearance of the lower esophageal sphincter and a 5 cm fluid level of retained barium after 5 minutes. Esophagogastroduodenoscopy (EGD) showed a hypertonic lower esophageal sphincter with retention of saliva, mild esophagitis, absence of esophageal peristalsis, and resistance to endoscopic advancement into the stomach, concerning for achalasia. Unfortunately, the patient was not able to tolerate an esophageal manometry study. Based on clinical symptoms and testing including CT imaging, esophagram, and EGD, the patient was diagnosed with achalasia and referred to surgery for consideration of myotomy.

Discussion: Development of concurrent achalasia and CIPO is rare, although esophageal dysmotility is common in patients with CIPO and may suggest worse clinical outcomes. Rather than representing two separate disorders, CIPO and achalasia may reflect a singular disease process affecting the myenteric plexus. More research is needed to explore this association and the underlying pathophysiology. 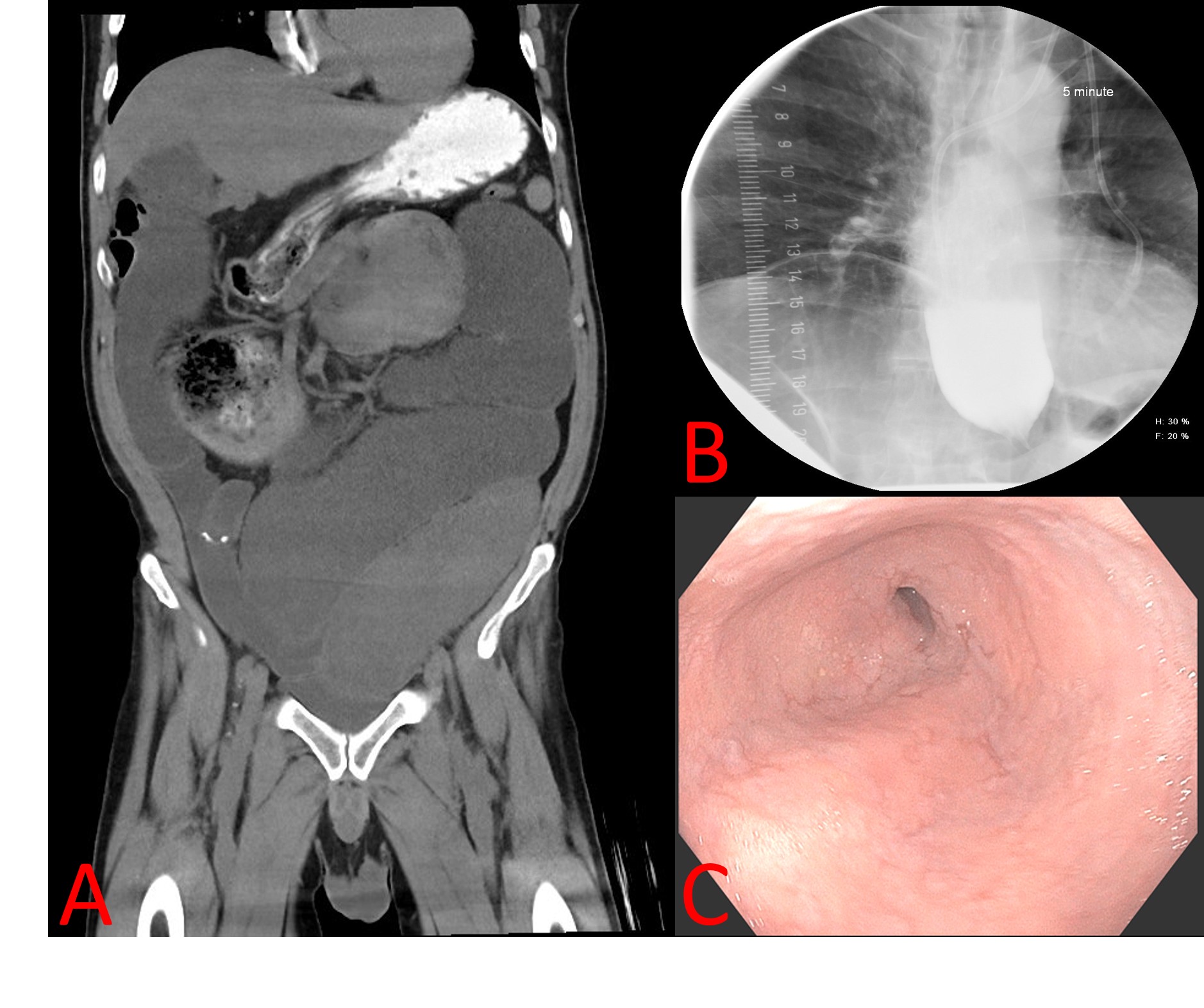