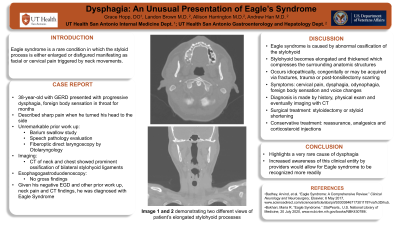 Introduction: Eagle syndrome is a rare condition in which the styloid process is either enlarged or disfigured manifesting as facial or cervical pain triggered by neck movements. We present an usual case of dysphagia due to Eagle syndrome.

Case Description/Methods: A 38-year-old male with gastroesophageal reflux disease (GERD) presented to his primary care physician for progressive dysphagia and foreign body sensation in his throat for a few months in duration. Prior work up included an unremarkable barium swallow study showing no esophageal abnormalities; as well as, a speech pathology evaluation that was not consistent with an oropharyngeal etiology. Otolaryngology evaluated the patient with fiberoptic direct laryngoscopy which was negative for any significant findings. The patient underwent a computed tomography (CT) of his chest and neck that showed prominent ossification of his bilateral stylohyoid ligaments.

Due to his ongoing symptoms and history of GERD, he was referred to gastroenterology for an esophagogastroduodenoscopy (EGD). During pre-endoscopy evaluation, the patient described sharp pains in his neck when he turned his head, which raised suspicion for Eagle Syndrome. When the EGD showed no gross findings to explain his dysphagia, he was diagnosed with Eagle syndrome as the etiology for his dysphagia and cervical pain based on review of his previous workup, notably the CT neck showing prominent ossification of bilateral stylohyoid ligaments.

Discussion: Eagle syndrome is caused by abnormal ossification of the stylohyoid. When this occurs, the stylohyoid becomes elongated and thickened which compresses the surrounding anatomic structures. This process can occur idiopathically, congenitally or may be acquired via fractures, trauma or most commonly, post-tonsillectomy scarring. Eagle syndrome causes a myriad of symptoms such as cervical pain, dysphagia, odynophagia, foreign body sensation and voice changes. Diagnosis requires a high degree of clinical suspicion and is made by history, physical exam and eventually imaging with CT or other imaging modalities. Eagle syndrome can be treated surgically with styloidectomy or styloid shortening. This process can also be treated conservatively with reassurance, analgesics and corticosteroid injections.

This case highlights a very rare cause of dysphagia. Increased awareness of this clinical entity by providers would allow for Eagle syndrome to be recognized more readily as a cause of dysphagia to potentially avoid extensive work up, as in our patient.