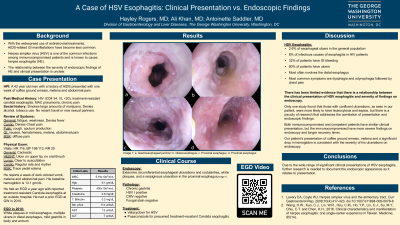 Introduction: With the widespread use of antiretroviral treatments, AIDS-related GI manifestations have become less common. Herpes simplex virus (HSV) is one of the common infections among immunocompromised patients and is known to cause herpes esophagitis (HE). The relationship between the severity of endoscopic findings of HE and clinical presentation is unclear.

Case Description/Methods: A 42 year old man with a history of AIDS and treatment-resistant Candida esophagitis presented with one week of coffee ground emesis, melena and abdominal pain. Additionally he endorsed nausea, dysphagia, and odynophagia. On exam he was cachectic and had an ulcer on his upper lip. No oral thrush was seen. His baseline hemoglobin of 13.6 g/dl dropped to 9.1 g/dl. His CD4 was 39 cells/mm3 with an undetectable viral load.

The patient was empirically started on posaconazole for presumed treatment-resistant Candida esophagitis. Pathology was positive only for HSV-1. Valacyclovir was started with no further clinical evidence of bleeding.

Discussion: HSV accounts for an estimated 2.6% of esophageal ulcers in the general population. Thirty-two percent of patients with HSV esophagitis present with GI bleeding. HSV accounts for only 8% of infectious causes of esophagitis in HIV patients. The primary complaints of patients are dysphagia or odynophagia, followed by chest pain. Eighty percent of patients have ulcers and most cases involve the distal esophagus. There has been limited evidence that there is a relationship between the clinical presentation of HSV esophagitis and severity of findings on endoscopy. Only one study found that those with confluent ulcerations, as seen in our patient, were more likely to have leukocytosis and sepsis, but there is a paucity of research that addresses the correlation of presentation and endoscopic findings. Both immunocompromised and competent patients have similar clinical presentation, but the immunocompromised have more severe findings on endoscopy and longer recovery times. Our patient’s presentation of coffee ground emesis, melena and a significant drop in hemoglobin is consistent with the severity of his ulcerations on endoscopy.

Due to the wide range of significant clinical presentations of HSV esophagitis, further research is needed to document the endoscopic appearance as it relates to presentation.